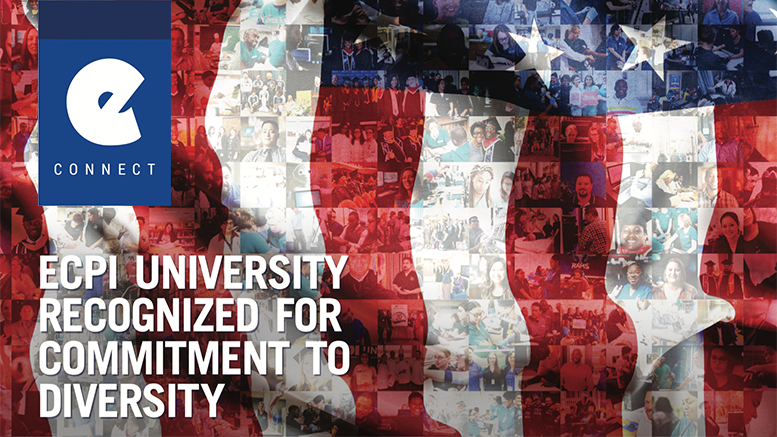 Since it was founded more than a half century ago, ECPI University has been dedicated to helping people from all walks of life realize their educational goals. In recent years, there has been a greater national emphasis on diversity but it has always been a high priority at ECPI and is reflected among the students, faculty, and staff throughout its campuses. Nonetheless, it is always appreciated when this commitment is recognized by others.

Recently, U.S. News & World Report announced its annual rankings of America’s Best Colleges and once again, ECPI University was selected for excellence in academics and superior student support. ECPI University, with campuses in Virginia, North Carolina, South Carolina, Florida, and Texas, is ranked among the best Regional Universities in the South. Moreover, it is ranked #3 for Economic Diversity and #5 for Ethnic Diversity. Economic Diversity is assessed among institutions that receive a Best Colleges ranking and serve the most students from lower income households. Ethnic Diversity is an index that favors universities with the greatest ethnic diversity among its student population.

In addition, HISPANIC Network Magazine and Diversity in STEAM Magazine has just named ECPI University to its lists of Top Colleges and Universities. According to the magazines’ publisher, this annual review is an evaluation of the nation’s universities and colleges’ diversity initiatives. It provides non-biased results that are valuable resources for students, future enrollees, job-seekers, senior management, employment agencies, and consumer groups. The goal of the annual evaluations is to not only bring the latest information and guidance to its readers, but also encourage active outreach and diversity policies among educational institutions. The lists were compiled from market research, independent research, diversity conference participation, and survey responses that were performed by the publisher’s agents and affiliates.

“This recognizes how effective ECPI University is at providing an accessible, quality education,” says ECPI University President Mark Dreyfus. “We have a strong record of graduating minorities into careers in health care, information technology, advanced manufacturing, business, criminal justice, and hospitality. We are recognized for being third in the nation in the number of African-Americans graduating with undergraduate computer science degrees, nearly 2.4 percent of all such degrees earned in the U.S. We are also the largest provider of African-American nurses in the Mid-Atlantic region.”

Diversity, by its very nature, is a broad term with a wide range of applications. Throughout the University’s campuses, there are people who provide unique perspectives based on an array of socioeconomic factors, including:

For students, learning among these diverse groups provides a wide range of benefits, such as:

Countless books have been written on the topic of diversity, but perhaps the best way to see diversity in action is to view it through the eyes of ECPI University’s students, faculty, and staff. They are the people whose presence on campus contributes to an inclusive, rich, and robust learning environment.