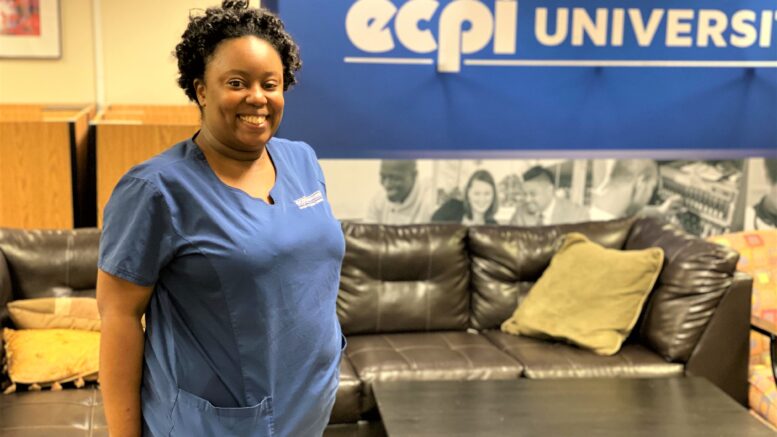 Eleven years ago, Kiera Richardson was “too scared to do the nursing program.” With a two-year-old at home, she felt safer enrolling in the medical assisting program at ECPI Greenville where her confidence developed, along with her talents. Now a graduate of both that program and practical nursing, she is set to earn her third credential, an associate’s degree in nursing (ADN) in 2020.

“Medical assisting was a good way to get my feet wet. I had always wanted to do something that allowed me to help people, but there was no point in investing a lot if the medical field wasn’t for me—I love it though,” Richardson said.

Earning her first degree in 2010, Richardson went to work right away for the employer that had provided her externship, North Hills Medical Center. With the assurance she could handle the rigorous requirements of practical nursing courses, she was soon back at ECPI. One of her biggest sources of inspiration throughout the journey was her grandmother, a graduate of Clemson University and Benedict College, who was a strong advocate for education. When Richardson graduated for a second time in 2011, she gave her cap and lamp to her grandmother.

“If you miss a class at ECPI; someone will check on you. If you need something, they find a way to help.”

“My first hands-on experience caring for another person was with her before she passed away. I was basically doing [certified nursing assistant] type work taking care of her, and later, I helped monitor her medicines,” Richardson said. “I wish she could be here to see me graduate again, but it’s okay.”

From the beginning of a seven-year tenure with Pelham Medical Center, Richardson was gratified by the her colleagues’ appreciation of her knowledge and abilities. She quickly realized that she was not only adept at her own duties, but also quite familiar with those of the people around her. For that, she gives significant credit to the school that will soon be her three-time alma mater.

“It started when I was interviewing. People’s facial expressions would change when I said I went to ECPI. It was like they knew I could handle whatever needed to be done,” she said. “One of the best things about being an ECPI graduate is standing out. They definitely prepared me for my career choice.”

Between academic programs, Richardson strived to learn something new every day. She said she is “antsy” if she’s not figuring something out because she understands that what she knows could make a huge difference to someone one day. That practice earned her the nickname “Dr. Richardson” among some of her co-workers, one of whom encouraged her frequently to continue her formal education. Richardson said she would be giving the cap to her this time, but she passed away recently, so she will find a special place in her home where it will honor those who supported her along the way and serve as a symbol of her own perseverance.

Over the last several months, Richardson has been studying alongside her husband, a student at Brockman School of Theology, and her two sons and stepson, who have been learning from home due to the COVID-19 pandemic.

“That’s right, three boys—four, if you count my husband—all doing homework . . . no one needs help, or they all do at the same time,” Richardson said, “but nothing’s going to stop us.”

After her third graduation, Richardson hopes to work for Spartanburg Regional Healthcare System and eventually earn bachelor’s and master’s degrees and become a nurse practitioner. If the programs are available, she said she’ll look no farther than ECPI.

“It may sound cliché, but I’ve been to schools where I was just a number. If you miss a class at ECPI; someone will check on you. If you need something, they find a way to help. There must be something in the interview process for instructors or in the water there,” Richardson said. “I can tell them about anything that’s happening in my life. Most likely, they’ve walked through something similar, and they walk with me now. If there’s another opportunity, I’m there.”