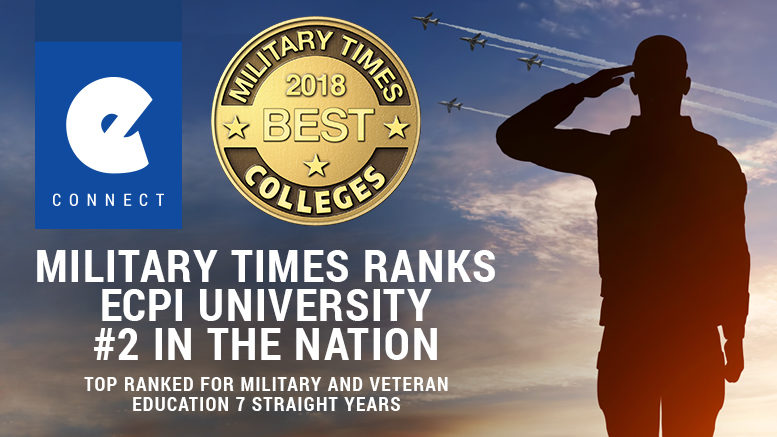 For service members, the transition from military to civilian life comes with some challenges. Oftentimes, a college education becomes their bridge to a whole new life. While they are typically excellent students, the most successful among them often attend universities that understand their unique needs and tailor student services to accommodate them.

To help veteran and military students identify institutions that do this best, Military Times established an annual survey of the schools who excel in this arena. And for the seventh straight year, ECPI University has been selected as one of the best. The Military Times Best: Colleges 2018 rankings factor in the results of a comprehensive school-by-school assessment of veteran and military student services and rates of academic achievement.

Best Colleges 2018 is an editorially-independent news project that evaluates the many factors that contribute to academic success among military and veteran students. More than 600 colleges and universities took part in this year’s survey, with ECPI University ranking number two in the nation among career and technical colleges, a category that includes community colleges and four-year career-focused colleges and universities.

“It’s an honor to be recognized for our commitment to skills-based education,” says ECPI University Executive Director of Military Education Bob Larned. “In today’s highly-technical job market, employers need people who can perform their duties with little or no training. At ECPI University, we have been producing those kind of graduates for more than half a century.”

Of all the schools that applied this year, fewer than half received the Military Times Best: Colleges designation. “Only the best made the cut,” said George Altman, the Military Times editor in charge of the rankings. The survey requires colleges and universities to meticulously document a wide range of services, accommodations, and financial incentives offered to students with military ties; and to define the veteran culture on a campus. Military Times also factors in data from the Departments of Veterans Affairs and Defense, as well as three Education Department sources: the IPEDS Data Center, College Scorecard data, and the Cohort Default Rate Database.

[Tweet ““Only the best made the cut,” said George Altman, the Military Times editor”]

But data doesn’t tell the whole story. Ultimately, student success is a series of personal interactions with faculty and staff. They are the ones who make ECPI University special. They are the ones students remember years after they have graduated. Each of them has a story. Here are just a few.