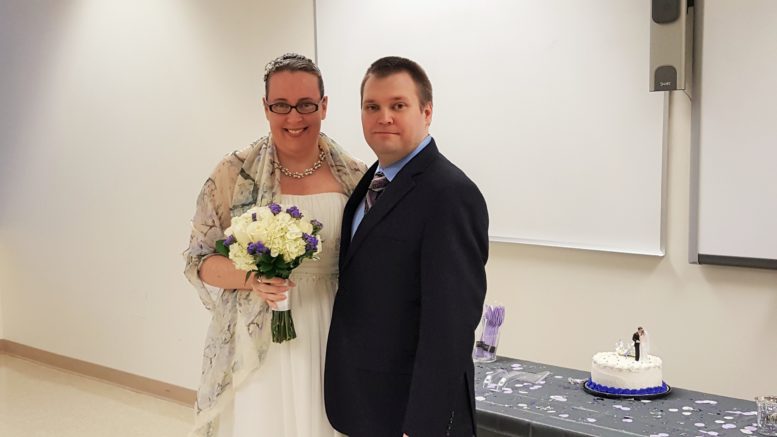 Columbia Grad: “It’s All about Family” A classroom at ECPI University’s Columbia, South Carolina campus may not be the most romantic place to get married, but this was where Tad Jarvis’ life began to change for the better. Back to that in a moment.

Not long ago, Tad was plodding from job to job. Each one provided a paycheck, but little else. Then, he began working for a vending machine company and ECPI University was on his route. He was curious about what he saw on campus and began talking to students and faculty members. At some point, he began to realize that fate was lending its hand.

One day, Tad was talking with someone from the career services department as he filled a snack machine. “He said to me, ‘you’re too smart to be doing this for a living,’ says Tad. “It got me to thinking. I’ve always liked computers. I saw people just like me every time I came to ECPI. They were getting a great education. Most of them didn’t know any more about computers than I did when they first started. That’s when I decided I was ready, so I enrolled in the Network Security program.

“I earned my Associate’s degree, then went on to receive my Bachelor’s. One week after my final class, I had a job. I can’t believe that I now get paid to do something I love!”

[Tweet “I earned my Associate’s degree, then went on to receive my Bachelor’s. One week after my final class, I had a job.”]

Speaking of love, Tad got engaged last year. When it came time to take his vows, he wanted to include the people he considered his extended family. “I really miss ECPI. Everyone there treated me so well and were always there for me whenever I needed help or guidance,” says Tad. “I couldn’t think of a better place to begin the next chapter of my life, so I asked Mr. Rund if we could have the wedding ceremony on campus.”

Campus President Jim Rund says he was delighted by the request. “We’ve always considered Tad a part of the family,” he says. “We are very proud of his accomplishments as a student and a graduate. It’s been a privilege to be a part of his success, and an honor to fulfill his request. We wish him the same amount of success in his marriage as he’s had in his new career. I just hope he doesn’t ask to use the medical lab to birth his first child!”

Back to School Online for Former College Basketball Player