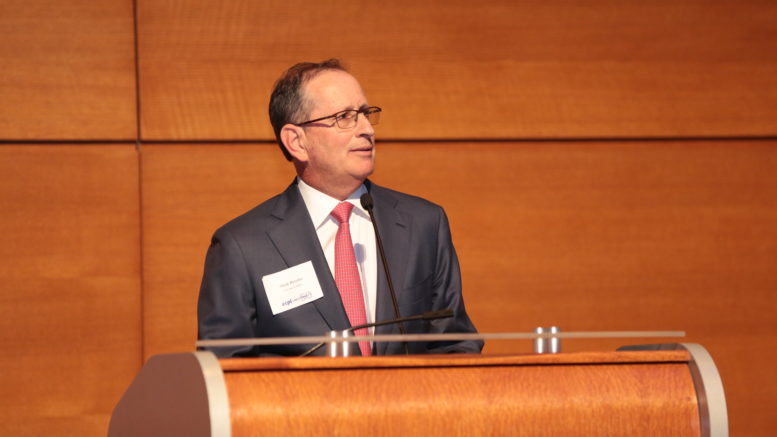 In 1966, Alfred Dreyfus had a vision: to establish a school where people could learn how to program computers. In hindsight, that seems like a perfectly reasonable idea. At the time, however, it was considered somewhat risky. Many “so-called” experts believed that computers were a fad. Mr. Dreyfus thought differently and his bold decision to proceed has made a tremendous difference in the lives of the 70,000 graduates who enrolled at ECPI University seeking a rewarding career.

In November, more than 700 current and former faculty and staff members joined dozens of employers, community leaders, students, and graduates at the Virginia Beach Convention Center to celebrate ECPI University’s 50th anniversary. During his remarks, Alfred Dreyfus’ son and current ECPI University President, Mark Dreyfus, took a moment to reflect on his father and all those who have contributed to ECPI University’s success…or more to the point, the success of its graduates.

[Tweet “ECPI University President, Mark Dreyfus, took a moment to reflect on his father and all those who have contributed to ECPI University’s success…or more to the point, the success of its graduates.”]

“Really, this story started 70 years ago, not 50 years ago,” said Mr. Dreyfus. “Seventy years ago, my father was a refugee from Europe. He came to this country and was just trying to make it as an immigrant, arriving with just $14 in his pocket.” Alfred Dreyfus may not have had much money, but did have the skills he acquired during an accelerated training program he completed at the end of World War II in Switzerland. Mr. Dreyfus studied electronics and was soon working as a technician in New York.

As his career progressed, Mr. Dreyfus never forgot what made it all possible. “He really appreciated what the military had done to save the world because if it hadn’t been for the brave men on Normandy Beach, he wouldn’t be here,” said Mark Dreyfus. “So, we really want to thank all of those who have served in the military for your efforts because none of this would have been possible without you.”

[Tweet ““He really appreciated what the military had done to save the world because if it hadn’t been for the brave men on Normandy Beach, he wouldn’t be here,” said Mark Dreyfus.”]

Closing out his remarks, President Dreyfus put in context ECPI University’s impact during its first half century. “Seventy thousand graduates, that’s something any institution could be very proud of, but we are the school of second chances. Most of our students have come to us from other types of institutions or they had some type of situation in their lives and we were able to help them, and we are very proud of that. And that takes a very dedicated faculty and staff.

“We have some of our employers here and I want to thank them for giving our students a chance, because in this day and age, what we need is opportunity for all people and moving people from different income levels up. And we have shown that our programs, whether they are healthcare or technology or business or culinary or criminal justice…those students with those skills get that opportunity to move up.

“So, I want to thank all of you, the students that are here, the staff, and certainly our faculty for all your effort and the belief you have in us because it takes all of us together to make this institution successful. And I am certainly proud of all we have done and accomplished and we have so much more to do, hopefully, in the next 50 years.”

ECPI University: Hands-On Learning, In and Out of the Classroom

Graduate Living His California Dream Thanks to ECPI University