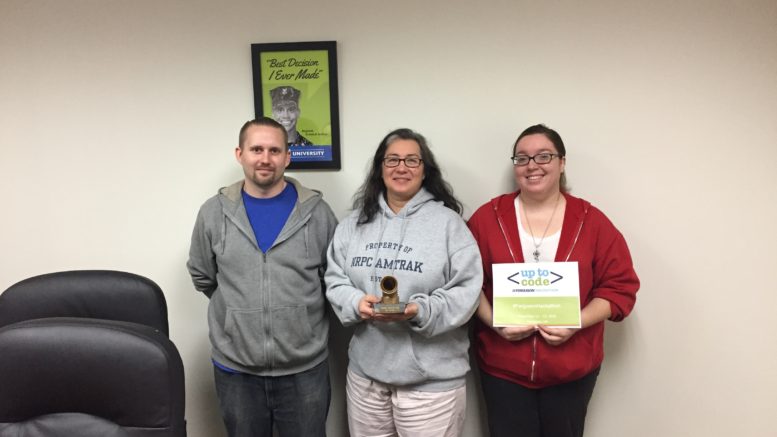 Ferguson challenged the 29 participating students to create mobile solutions that would be useful to Ferguson customers – plumbers, builders, and home repair professionals, as well as heating and air technicians. After all the presentations had been completed, a team that included three students from ECPI University’s Newport News campus took top honors.

[Tweet “After all the presentations had been completed, a team that included three students from ECPI University’s Newport News campus took top honors.”]

Software Development students Carla Lincoln and Christina Waterfield, along with Network Security student Arthur Champion, helped create an app and web-based scheduling manager called “PlumbWorks” in which customers can order plumbing fixes or heating and air repairs while a business manager assigns the work to technicians who can check their scheduled jobs in real time. As changes are made, the app sends notifications.

Company officials were especially pleased with the event, saying it provided a venue for cross-departmental collaboration between Ferguson employees – who volunteered their time – and members of the community. Moreover, they say the hackathon offered the company an opportunity to showcase its own IT department and engage potential employment candidates which is particularly important as demand for IT talent currently exceeds supply nationally and regionally. In recent years, Ferguson has grown dramatically. It is now a $13.8 billion-dollar company with more than 1,400 locations and 23,000 associates nationwide.

“We appreciate Ferguson hosting this terrific event,” says ECPI University Newport New Campus President Dr. John Olson. “We are especially proud of our students. Competitions such as this allow them to demonstrate their skills and ability to successfully compete with anyone.”

Technology can come at a High Cost for Multitasking Students