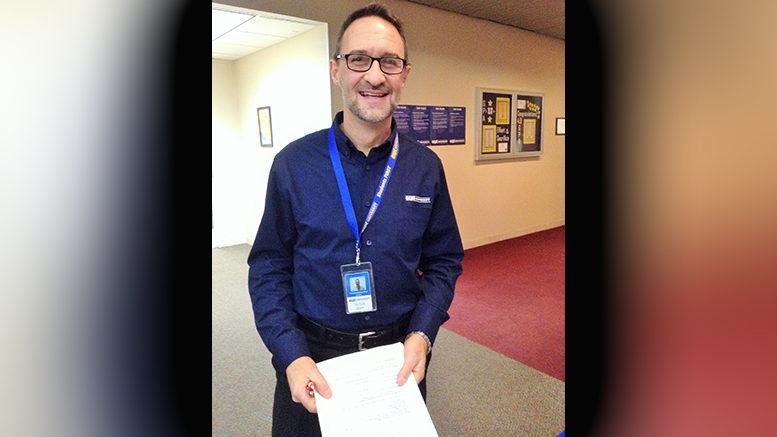 Peter Bray’s path to ECPI University is not typical. It began in England with a stopover in Bermuda before he arrived in Virginia. His background is not typical. He earned his first degree after enrolling at a local college at just 16 years of age. He worked a full-time job to support himself, barely getting by at times. Upon graduation, he became a police officer, first in his hometown of Manchester, then in Bermuda.

Peter later moved to Virginia in hopes of pursuing a career in American law enforcement, but was disappointed to learn he did not meet the qualifications. Needing to work, he began selling cars at an Acura dealership where he met and befriended a retired Marine Colonel who was director of military affairs at ECPI University. That friendship led to an interview that would change the course of Peter’s life.

[Tweet “All I had to do was listen, care, and provide the best experience possible to all that we serve, to help them make the best decisions for themselves and their families. To this day, that has been my mantra.”]

Peter (center) as a police officer in Bermuda

It began with meeting ECPI University founder Alfred Dreyfus. “Mr. Dreyfus immediately made me feel at ease,” Peter says. “He explained to me that the position was very simple. All I had to do was listen, care, and provide the best experience possible to all that we serve, to help them make the best decisions for themselves and their families. To this day, that has been my mantra.” Peter began working with ECPI in 1992 as an admissions advisor in Virginia Beach and would eventually become the director of admissions at the Richmond/Moorefield campus. At the time, he had the British equivalent of an associate’s degree. When ECPI University began offering bachelor’s degrees, he felt he needed to earn one himself in order to best serve prospective students.

So, just like many of the students he advised, Peter enrolled at ECPI University and continued to work full-time. “My children watched me struggle during those years, and still talk about it to this day,” he says. “The education and support I received from ECPI and the academic staff was exemplary. I was never alone and always felt that I had support and guidance during my studies. The self-satisfaction and mental stimulation it brought me as I broadened my knowledge base and life skills was priceless…and it truly helped me serve my students better from the outset, giving them advice from my own experiences.”

It’s clear that Peter’s journey has been anything but typical. Maybe that’s why he has been so successful. Many of the students he serves have equally varied backgrounds. Peter says that makes each such encounter all the more special. “To have helped so many people during these past 25 years has been a great honor. I estimate that I’ve interviewed more than 10,000 families and have made so many friends. It has been my mission from day one to give my heart and soul to all I meet, and the opportunity to watch student’s lives change for the better has been the greatest reward.”

Be the first to comment on "ECPI University Admissions Director: Peter Bray, an Atypical Journey"