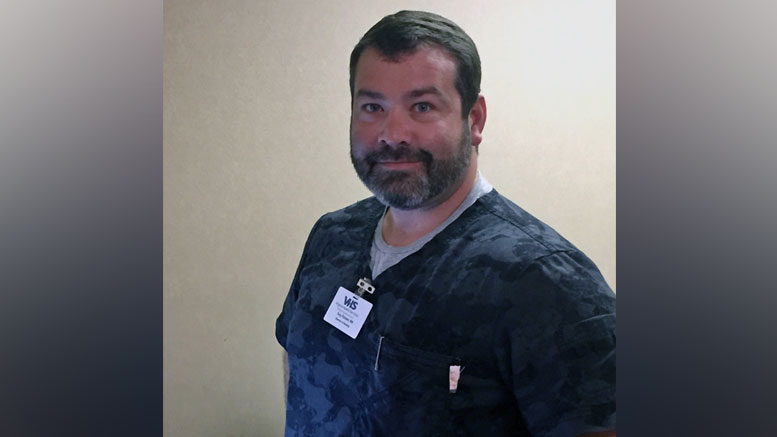 After one tour in the Navy, Tory Firman tried his hand at sales, first insurance, and then cars. It put food on the table but didn’t provide the fulfillment he was seeking. Then, the economy soured and that forced his hand. Tory began thinking about a major career change. “I had always loved science, working with people, and I have a strong stomach, so I began thinking about nursing,” he says.

Tory began looking at schools and was immediately drawn to ECPI University’s accelerated programs. Soon after he enrolled, and from that point forward, he wasted no time. In a year and a half, he completed his degree, passed the NCLEX licensing exam, and began working for Virginia Health Services. That was 2010. Two years later, Tory was named Employee of the Year and promoted to supervisor, then another promotion to assistant director of nursing, and last year, he was named director of nursing at James River Convalescent & Rehabilitation Center in Newport News.

“When I was a nursing student, the first time I ever had contact with a patient was during my clinical rotation at James River Convalescent, says Tory. “I could never have imagined that I would be back here just six years later as director of nursing!”

Tory believes ECPI University’s accelerated schedule really prepared him for today’s fast-paced healthcare environment. “In the classroom, no time was wasted,” he says. “It was all about learning new concepts and immediately applying them in simulated settings, that way it would stick with us. I think that is a key reason why I have advanced so quickly. I’ve hired about half a dozen ECPI graduates over the years. In fact, I will take as many of them as I can get my hands on. They’re just better prepared.”

[Tweet ““I can support my family and as for my future, the sky’s the limit.””]

Tory’s quick rise within his company has been accompanied by a sense of peace. When the economy went bad in 2007, he worried about paying his bills. “Now, I have job security,” he says. “I can support my family and as for my future, the sky’s the limit.”

Be the first to comment on "Newport News Nursing Graduate, Navy Veteran Quickly Climbs the Ranks"