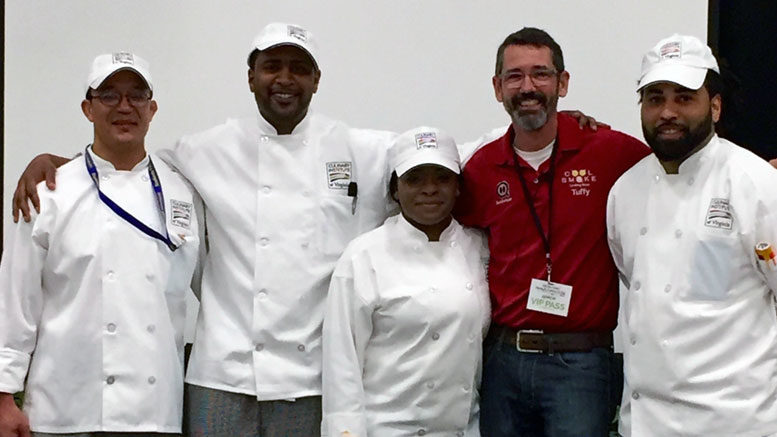 Although he’s a classically-trained French chef, Chef Tuffy Stone is among the world’s greatest barbeque pit masters. In addition to hosting a popular TV show, he has won Grand Champion titles in nearly every major barbeque competition including the Kingsford Invitational, American Royal World Series of Barbeques, and Jack Daniel’s World Championship Invitational. Obviously in great demand, it was a tremendous honor to have Chef Stone judge the Culinary Institute of Virginia’s “Rub Your Grub Challenge.” As part of the 2016 Mid-Atlantic Home & Outdoor Living Show in Virginia Beach, this competition, which benefits the school’s scholarship fund, included five student teams, each charged with creating dishes that represent fresh ideas on some old favorites.

[Tweet “Congrats to all the talented culinary students that accepted the “Rub Your Grub Challenge!””]

While Chef Stone was more than qualified to evaluate each entry, he got plenty of help from the 100 people who paid to be a part of the event. Contestants were judged based on suitability of the dish, flavor profile, and creativity. After much debate, the team which called itself Route 166 BBQ received top honors with its version of Southern BBQ Boston Butt. Congrats to all the talented culinary students that accepted the “Rub Your Grub Challenge!”