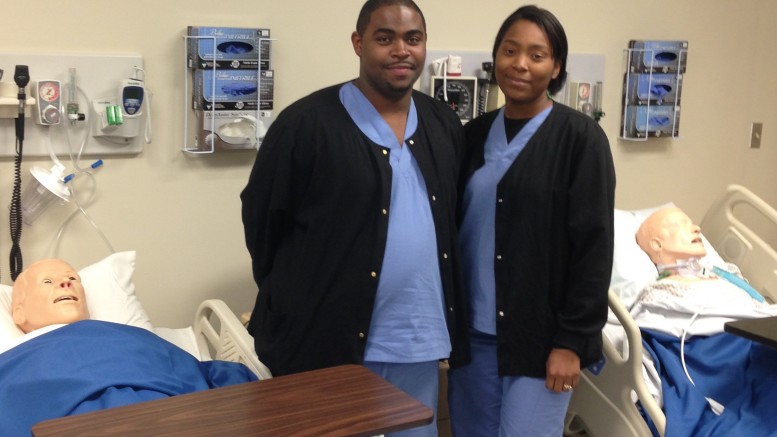 Between work, going to school at night, and raising three young daughters, Martina and Nicholas Crowder have little time to spare. Both are in the practical nursing program at ECPI University’s Roanoke campus. To say they are goal-oriented would be an understatement. Just a few years ago, Martina was a stay-at-home mom and Nicholas was working in food service. Since then, both have become medical assistants and a nursing degree is just the next item on a long list of goals.

“We got tired of depending on help from everyone else,” says Martina. “We want to be able to give our daughters a good life.” While it’s been difficult trying to find family time, going to school together has made the Crowders a formidable pair. “If one of us doesn’t understand something, the other one usually does,” she says. “We look out for each other to make sure neither of us falls behind. The faculty has also been really excellent. So between our determination and ECPI University’s support, we pretty well stay right on track.”

All of their hard work is about to pay off as they are now within a couple short weeks of completing their degrees. For now, Martina says they plan to make up for lost time with their daughters but she and Nicholas fully intend to be back in the classroom – be it on campus or online – in the not-so-distant future. Nicholas eventually wants to become a nurse practitioner and Martina would like to earn a master’s degree.

Of course, that will all happen a little further down the road. For the time being Martina says, “I just want to take my girls to the zoo, give them the childhood they deserve.”