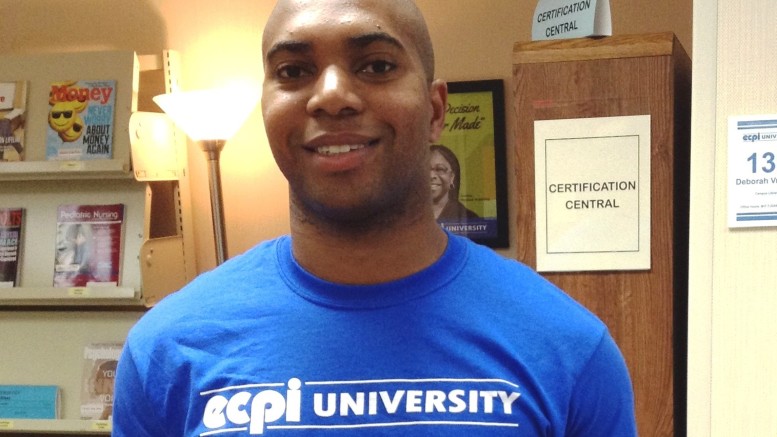 He may still be a student, but when it comes to certifications, Dominic Eldridge is a real pro. To date, he has taken and passed tests to earn nine professional IT certifications:

[Tweet ““There are graduates out there who are well into their careers who do not have half the certifications that Dominic has earned.””]

“There are graduates out there who are well into their careers who do not have half the certifications that Dominic has earned,” says Jeremy D. Johnson, Richmond/Moorefield Campus Director of Career Services.

Clearly, what Dominic has accomplished is way beyond the norm. So, what’s motivating him to relentlessly pursue one certification after another? Chances are that it’s not what one might think. No, he’s not a chronic overachiever. He just stumbled onto something that seems to make his life a bit easier.

Last year, he needed a job to help make ends meet but wanted to do something that would also benefit him professionally. So, he went to Jeremy Johnson who helped him find a temporary position doing IT work for a local company.

“I was really struggling at first so I decided that I would go to our campus library and check out the A+ Certification book and try to figure some things out,” says Dominic. He figured it out, all right. He became so comfortable with the material that he sat for the exam and passed. He soon became one of the company’s “go-to” techs.

“Having certifications allows you to provide that ‘up-front’ proof to clients or employers that you have the dedication, education, and interest in expanding your technical skills,” says Pfaff. “To put it into perspective, if you were an employer and you had two prospective candidates for a position, one of which was not certified in any capacity and the other was MSCE, CCNA and/or Security + certified, who would you look to bring on board? And from an employee perspective, certifications offer you an opportunity for higher starting pay.”

Be the first to comment on "IT Certifications, Career Opportunities Abound for Richmond ECPI University Student"