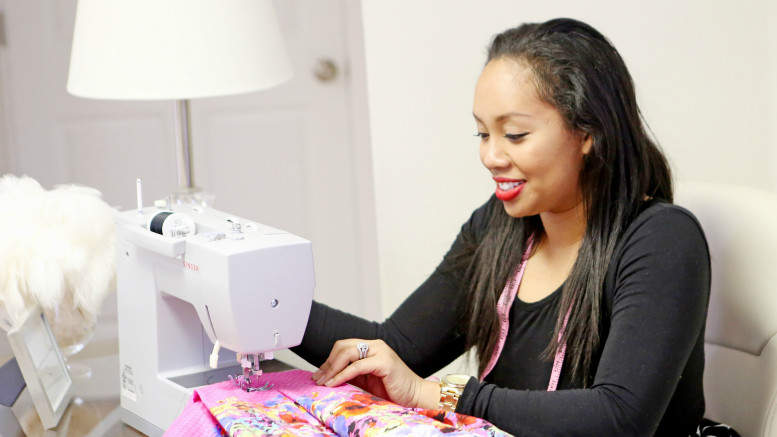 Tabitha Sewer has an entrepreneurial spirit. During her 10 years in the Air Force, she always had a side business or two. So when she left the military, she figured a business degree was the next logical step but she wanted to move fast.

“I really did not want to spend any more time in school than was necessary,” she says. “That’s why I chose ECPI University. I saw I could earn my degree in Business Administration in 2.5 years and I knew that was for me.”

When she began school in 2012, she attended class at night so she could be home with her children during the day. Even with her busy schedule, she found she still had some spare time on her hands and decided to learn how to sew, recording her progress on camera through YouTube and Instagram. Soon, she was creating clothes that were becoming the envy of her growing number of online followers.

“People would see something I made and ask me to make one for them,” says Tabitha. “I would always tell them that I would rather teach them how to do it, so I would post ‘how-to’ videos.”

After a while, however, it became evident that her huge online following was the perfect launching pad for a business. Subsequently, what began as a hobby is now become a rapidly-growing company.

Tabitha has nearly 6,000 Instagram followers and more than 21,000 subscribers to her YouTube channel. At this point, she is specializing in skirts but is about to launch a bridal line. In addition to her many online sales, one boutique in Williamsburg is now carrying her skirts and a second one is about to come on board. Her designs have even turned some heads in Hollywood. Actor Charlie Sheen’s wife has asked her to design something and an entertainment reporter is going to wear one of her skirts to an upcoming red carpet event.

While some might call Tabitha an overnight success, she is quick to point out that she could not do what she is doing without the education she received at ECPI University.

“I use what I learned at ECPI University every single day,” she says. “Whether it’s basic project management, marketing, or accounting, I use all of it to understand my target market and grow my business. I had one class I absolutely hated at first, but now I see it as the most valuable class I have ever taken. What I learned in that one class is what allows me to cost my materials and overhead and price my clothes accordingly. Just like they say on TV, going to ECPI University is the best decision I ever made!”