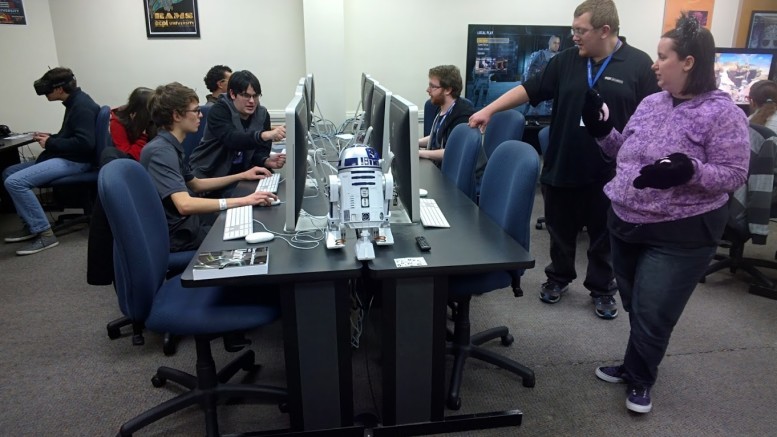 Gaming has been an important part of the lives of all those who have dared to think bigger and become a driving force within the many careers in technology.  Games have come all the way from the pixel-bouncing Pong to totally realistic and immersive virtual and augmented reality experiences.

Recently on the Virginia Beach ECPI University campus, gaming has been taken to a whole new level. The Players’ Club (Gaming Club) has begun a difficult and ambitious class in game development. The students in this class, written and taught by Gerry White, Associate Dean of Academic Technology, learn and apply principles of game development using primarily the Unity gaming engine, but also the Unreal and Game Salad engines.

This project will last approximately 20 weeks and takes place outside of class. Students attend two, 3-hour sessions a week on Thursday afternoons and Friday mornings. There are 20 students currently in the course, and a waiting list of just as many. They work in what once was the fishbowl, named so because of its glass walls, but has now been reimagined as the C_Lab, or Connections Laboratory, connecting game play with game creation, development, and education.

This course has also been gamified, which is the art of using the gaming concepts of rewards and punishments to better motivate students to succeed individually as well as in on a team. Using Classcraft, a role-playing game (RPG) environment, the students are on teams and have created their own characters. They earn or lose points based on what they do in class.

They also have to function in a rigorous team environment because in some cases, if a member suffers, so too does the team. As the class progresses, the students do work and help teach basic assigned concepts to others to level up and gain powers and armor for their characters. They can even earn gold and many other achievements for which they can use to buy pets or other in-game upgrades.

So far, the class is hugely successful. Students continually turn in all assigned work on time, do extra work to gain abilities, and function well in their team environments. As said by Sam Walton, a student in the class and President of the Players’ Club, “the game makes the material much more exciting. The engaging ways we connect our class concepts to other classes and to other games make it stick with me much longer.”

The students even continued to do work over the winter break. “I’ve never seen students so engaged and genuinely happy to do their work and be a part of a class,” says Gerry White. “They are eager to build their games and know that they are gaining the tools needed from our new Unification class.”

The course is named Unification because of all the disciplines that must be drawn upon to build a game. The class began with basic game theory, which leaned heavily on the skills gained in their English, Communication, Psychology, and logic courses. As soon as they began work within the game engines themselves, the students began to see how important their language, math, and critical thinking skills are to creating a game.

The class covers basic programming in a few different languages, 2D and 3D graphics, basic animation, music and background audio production, audience targeting, marketing, and publishing various games in many popular market places such as Apple’s Appstore, Google Play, Steam, and many more. Mr. White is also introducing some of the concepts involved in creating rich Virtual and Augmented environments. Kelii Amstrong, another student in the Unification course says, “creating a 3D virtual classroom that can be anything we want it to be is exciting, and I can’t wait. We are playing with and studying tools like the Oculus Rift, Google Glass, and the Leap Controller which have opened up a whole new world of opportunities.”

“Our gamified class will continue to guide and encourage these students to use their imaginations to create and work with others to create the games and worlds they want to play and live in,” says Gerry White. Once done with the first 20 week course, all the students who have reached level 20 in the game will graduate on to the advanced course and perhaps a new beginner Unification course will begin.

In a world where everything is becoming gamified from onboarding practices in HR departments, to the serious gaming in the military and private sector, these students will have a better look at what is coming next and be able to adapt to and/or help build that future.

“The game makes the material much more exciting. The engaging ways we connect our class concepts to other classes and to other games make it stick with me much longer.”

Sam Walton, Student and President of the Players’ Club