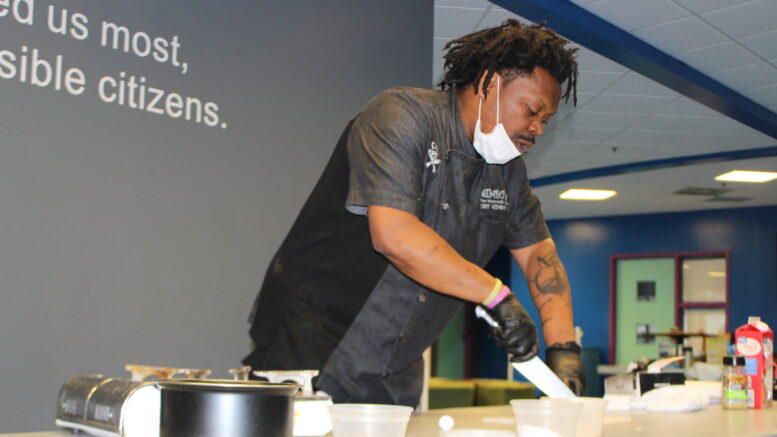 He may have grown up in New York, but it was the Navy that brought Shawn Wimberly, or “Chef Wimbo” as he’s known in Hampton Roads, to Virginia.

After 21 years of service, Chef Wimbo transitioned from the military to the classroom, investing in his love for cooking at the Culinary Institute of Virginia, ECPI University’s College of Culinary Arts.

“The Culinary Institute was amazing. I thought I knew a lot about cooking, but after my first class, I realized I didn’t know anything,” laughed Chef Wimbo. “What they taught me opened my eyes to a lot of things, especially about the basics of cooking.”

In 2012 he graduated with an associate degree in Culinary Science. “CIV taught me the techniques, which I take as far as I can, and then I incorporate my style,” he said.

A certified culinarian with the American Culinary Federation, Chef Wimbo has won multiple awards at local events, including the Tidewater Top Chef Culinary Extravaganza and the March of Dimes Signature Chefs Auction. “Style and technique are two different things. I stick to my roots when it comes to my southern-infused style, which I get from my grandparents. When I got in trouble I could either go to my room or I could go to grandma’s and cook.”

Chef Wimbo doesn’t like to cook for himself, he likes to cook for others. And he likes to experiment. “It doesn’t matter what I make because I just love to cook so much. I incorporate the flavors I like and find a way to elevate it to gourmet level.”

A multitasking master, the chef splits his time evenly between being a personal chef, owning the Beach House 757 kitchen, and running “Cups Up,” a food truck which travels all over Hampton Roads. In his free time, he’s still cooking, but for a different audience, the kids at the Boys & Girls Club (B&GC) in Virginia Beach.

Each month, Chef Wimbo teaches B&GC kids to cook, anything from tacos to chicken alfredo, during his afternoon lessons at the Rosemont location.

“When I was younger, I went to the Boys and Girls Club,” said Chef Wimbo, “I met so many good people there, mentors and role models, and they really cared. So when I got older and had the opportunity, it was a no-brainer for me.”

It seems the youth at the Virginia Beach location are catching the cooking bug. When asked who wants to be a chef when they grow up, almost half of the kids raise their hands because of what they’ve learned from the CIV grad.

ECPI University is a Game Changer for CIS Grad