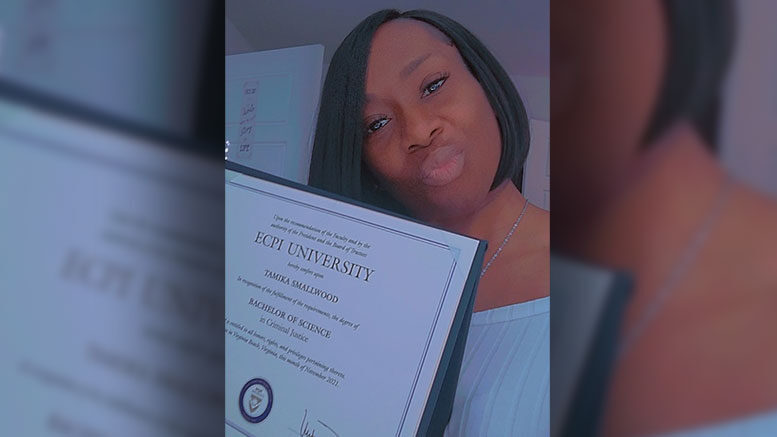 When we say Tamika Smallwood earned her degree, we really mean it.

As a young woman studying criminal justice at Norfolk State University (NSU) nearly 20 years ago, Tamika had her whole future in front of her when she started noticing some unusual puffiness in her feet.

When the swelling didn’t go away, and she started having a hard time eating and drinking, Tamika went to the doctor. But based on her age, she was given a clean bill of health. Frustrated and sick, it took four more trips to the hospital to finally get the diagnosis that changed her life: focal segmental glomerulosclerosis (FSGS), a rare, incurable kidney disease.

“There was no family history of FSGS but I found out that I had only been born with one kidney,’” said Tamika. “At just 23, dealing with kidney disease and going to school, it all just became too difficult. I was depressed and just dropped out.”

Following the birth of her son in 2005, Tamika’s kidney function fell to just 10%. ”When you get to that point, the doctors tell you that it’s either a transplant or dialysis that will keep you alive,” she said.

Tamika was lucky – she had a donor. “My younger cousin stepped up to donate one of her kidneys. She was like 18 or 19 at the time, and I had the transplant in September 2008.”

But, Tamika says, due to medical error, the kidney didn’t last and she found herself temporarily, partially paralyzed. Devastated by the whole process, for herself and her family, Tamika was sicker than ever, and had to be placed on dialysis three times a week for the next decade.

“I felt so unaccomplished. I couldn’t work. I was tired all the time. And I wanted to go back to school but I had so much anxiety around taking on something else,” she said. “After being hospitalized again for another complication, I realized I was living like I had already died. I looked at my son, and told him I was going back to school.”

With the support of her teenage son, in January 2018, Tamika met with ECPI University’s Senior Admissions Advisor, Deidra “DeeDee” Diggs.

“I had the pleasure of helping Tamika with her journey of enrolling into the criminal justice program,” said DeeDee. “When Tamika toured the campus with her son, she disclosed how she was battling a kidney illness and had made a promise to herself that if she did not accomplish anything else, she would accomplish her degree. Tamika’s son said how proud he was of her, and would be supporting her through this journey.”

Admiring Tamika’s strong will and her son’s sacrifice, DeeDee stepped in to help. “Mrs. DeeDee was so encouraging. It was hard doing dialysis, being a single mom and going to school, but every time I said ‘I couldn’t’ or ‘I’m thinking about dropping out,’ she helped me through it,” said Tamika. “I even surprised myself with my grades! School made me feel like a normal person.”

For Tamika, her time at ECPI University wasn’t a straight start to finish. She was hospitalized several times as treatment got harder. Again, she had to pause her classes when on July 17, 2019, another kidney became available. This time, the transplant was a success.

“One of my professors came to visit me in the hospital, just to make sure I was okay. Even some of my classmates visited me. And Ms. DeeDee kept reassuring me that I could come back when I’m ready, since I was having reactions to the new kidney and had to be put on a lot of medicine.”

In January 2021, Tamika signed back up to restart her classes at the Virginia Beach campus. “Even though I wanted to quit, I never gave up. It may have taken me longer, but once I started hitting milestones again, I could see the finish line.”

Just a few months ago, in November 2021, Tamika finally graduated with her bachelor’s degree in Criminal Justice.

“During Tamika’s educational journey with ECPI University, she showed me that her strength knew no boundaries, because from dialysis to receiving her brand new kidney, she was invested in her education,” said DeeDee. “She never lost faith in her goal. I am so proud, and so honored to celebrate with her.”

Today, Tamika is an ambassador for the American Kidney Fund and is using her story to make a difference. With a degree finally in her hand, and a heart for helping others, the sky’s the limit for Tamika Smallwood (ECPI University ’21).