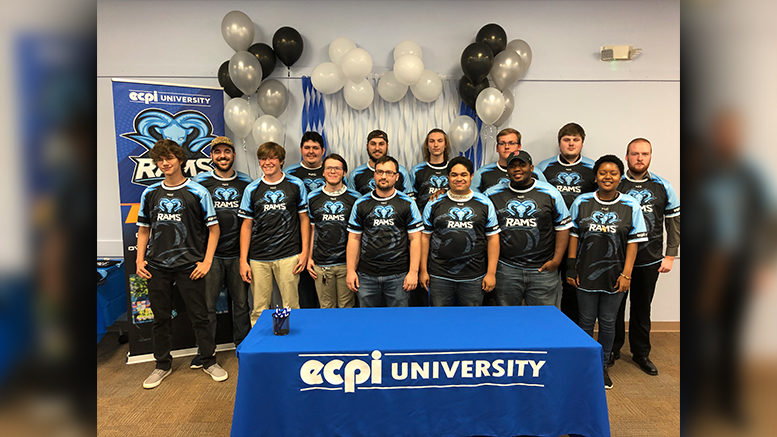 As the ECPI University Rams enter the summer hiatus, team members and coaches are busy preparing for next season. In its inaugural year, the team earned a very respectable record, winning nearly half its matches. Currently in a growth mode, the team has expanded its presence from the Virginia Beach campus to Newport News and Richmond with more to come. That means more talent to choose from when selecting each starting lineup… which bodes well for coming matches.

“Right now, we are busy practicing and honing our skills in preparation for the 2019-2020 competitive season,” says Athletic Director Mike Glover. Click To Tweet

“Right now, we are busy practicing and honing our skills in preparation for the 2019-2020 competitive season,” says Athletic Director Mike Glover. “With expansion campuses like Richmond coming online, our varsity roster is becoming more solid than ever with high-level players and students who are itching to represent this university in collegiate eSports.”

Also this summer: Working in partnership with NACE and GYO Score, ECPI University hosted its first eSports summer camp for League of Legends. The Rams Summer Camp and Combine program is for all interested gamers and eSports hopefuls who wish to improve their game and learn more about collegiate eSports opportunities. Participants receive group training sessions and several hours of practice play to help them understand the basics of competitive play in an eSports team environment.

All gameplay during their session was tracked, monitored, and analyzed by GYO professional analysts and coaches, and players received a custom report card following the event. Plus, the Rams will be hosting a series of one-day camps throughout the summer related specifically to eSports and how to improve one’s gaming, and what it takes to be a collegiate level player in eSports. There will be classroom instruction, practical skills, and real-time competitive game play under the guidance of professional collegiate eSports coaches and players. For more information, visit the Rams camp online.

“Starting in July of 2019, the ECPI University RAMS will be officially “Powered by OMEN by HP”." Click To Tweet

“In addition to team practices, and campus events like summer camps, we have been very busy with future campus expansion plans and a new partnership with HP and the OMEN line of Gaming PC’s,” says Glover. “Starting in July of 2019, the ECPI University RAMS will be officially “Powered by OMEN by HP”. We are delighted to have HP on board as our first eSports partner and look forward to expanding our already longstanding and mutually beneficial relationship with HP.”