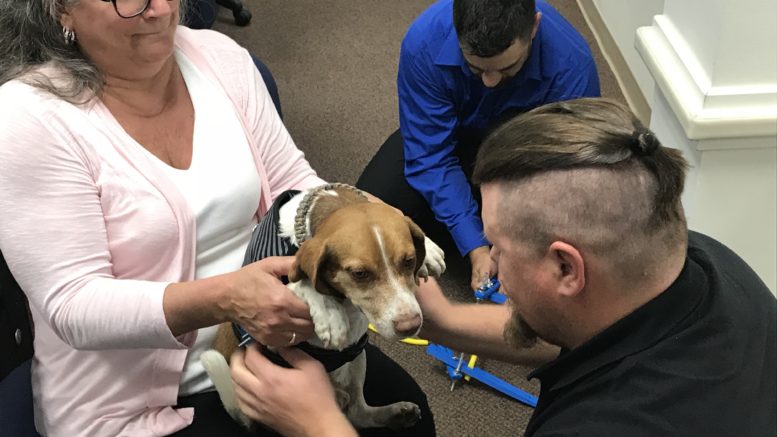 A few months back, Susan Glassner saw a post on ECPI University’s Facebook page. A group of students had created prosthetic arms for children using a 3D printer. She began wondering if the same sort of thing could be done for her 4-year-old Beagle, Ray Ray. Before she had rescued him, Ray Ray had been found with his foot caught in a trap. By the time he was seen by a veterinarian, it was too late. Part of his leg had to be amputated.

Susan called a friend of hers who works at the Virginia Beach campus who introduced her to Vedat Aksoy, the director of CAD and graphics. He saw it as an excellent opportunity to provide a real-world learning experience for his Capstone class and help an animal in need. Using their skills in CAD software, design, and 3D printing, he challenged his students to design and build Ray Ray a new prosthetic limb.

One of those students, Rich Plemons, put together a team of  five engineering technology students that began by taking measurements and then created a series of prototypes.  They had to create a device that was comfortable, yet durable enough to withstand Ray Ray’s attempts to chew on it.

[Tweet “Five engineering technology students that began by taking measurements and then created a series of prototypes.”]

Another challenge had to do with the dog’s gait. He had been without part of his leg for so long that it had affected the way he walked. To solve that problem, the students engineered a harness and wheels for Ray Ray to use while he gets used to his new appendage.

When they had worked out all the kinks, Susan and her husband, Phil, brought Ray Ray to campus for a final fitting. “It was a pretty cool moment,” says Rich. “It gave us a great sense of satisfaction, not just for a job well done, but for the chance to help this little guy lead a happier life.”