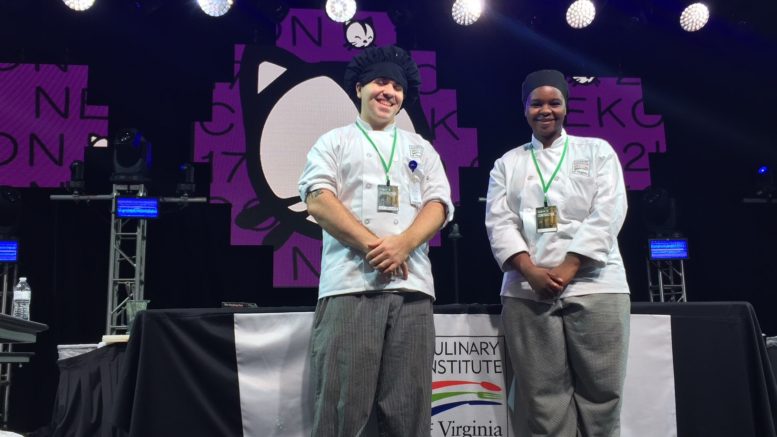 It may have originated in Japan, but anime – a form of animation characterized by colorful graphics, vibrant characters and fantastical themes – is now a global phenomenon with legions of loyal fans. Thousands of them from around the world recently gathered for NekoCon, a convention in Hampton, Virginia.

[Tweet “Culinary Institute of Virginia (CIV) to host a live cooking competition based on the anime show, Food Wars.”]

Here’s a little background: Shokugeki (食戟 Shokugeki) is a term that refers to cooking duels at the fictional Tōtsuki Culinary Academy where students face off in intense high-stakes cooking showdowns. For this real-world competition, teams of students were challenged to create a dish with an Anime/Japanese-inspired theme that exudes finesse and precision.

Shokugeki is not for the meek. The atmosphere is intense. Every ten minutes when the challenge gong rings, all cooking stops while one member from each team races to center stage to complete a culinary skills challenge. “This competition really requires students to demonstrate both discipline and artistic spirit,” says CIV Campus President Andy Gladstein. “They had to create very intricate dishes that not only have to be edible, but also very attractive.”

[Tweet ““They had to create very intricate dishes that not only have to be edible, but also very attractive.””]

In addition to the opportunity to cook in front of thousands of guests, participating CIV students competed for $8,000 in scholarship money. So without further ado, here are this year’s winners:

ECPI University Faculty are Making their Mark in the World