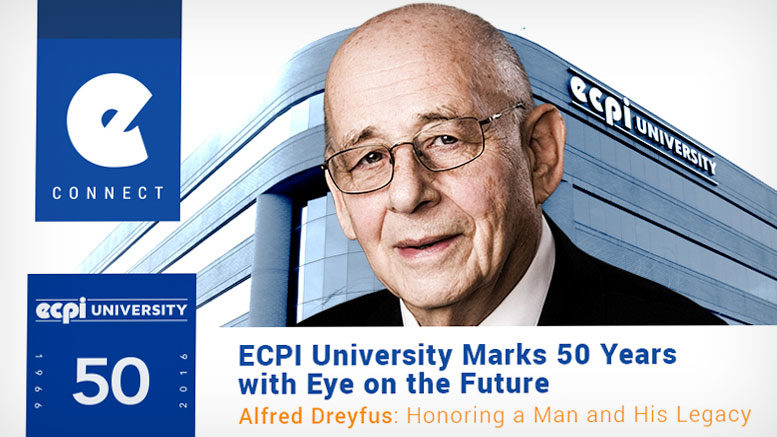 The year was 1966. America was a nation in the midst of great change – popular culture, the advancement of civil rights, and the space race, accompanied by myriad technological advances. It was also the year that Dynamic Random Access Memory (DRAM) was invented, paving the way for more powerful computers which made Alfred Dreyfus’ decision to create a new school all the more prescient.

Mr. Dreyfus always had his eye on the future, and there were two chapters in his life that well-prepared him for the task at hand. The first had to do with his own education. As a refugee shortly after World War II, he began studying radio electricity in Switzerland and was introduced to accelerated, hands-on education, a favored method of teaching in Europe but one that had not yet made its way to America. After completing his studies, he immigrated to the United States, arriving in New York City in 1947 with just $14.00 in his pocket.

More specifically, Alfred Dreyfus was closely watching the emergence of the fledgling computer industry. “Fifty years ago, if someone said they were going to teach programming, it was pretty revolutionary,” says his son, Mark Dreyfus, now ECPI University’s President. Few schools offered hands-on computer classes at the time, but the demand for trained professionals was growing. That’s when Alfred Dreyfus took a bold step and founded ECPI University, then known as Electronic Computer Programming Institute.

ECPI’s first campus was located in Norfolk, Virginia. While it was rather small, it offered a curriculum that few institutions could match. “When I started ECPI, there was myself, a secretary, two offices, two classrooms, and one lab, which consisted of an IBM card sorter and IBM accounting machine,” says Mr. Dreyfus. Six students enrolled in the first class that taught programming languages for the massive computers used in large banks and cities at the time.”

While the curriculum itself was quite advanced, so was the method of teaching. Most colleges at the time provided students with a general, often theory-based, education. Employer-led training often followed once they were on the job. Within the fast-emerging computer industry, employers needed applicants who were ready to do the job starting on day one.

[Tweet ““When I started ECPI, there was myself, a secretary, two offices, two classrooms, and one lab, which consisted of an IBM card sorter and IBM accounting machine.””]

That’s when Alfred Dreyfus began a practice that continues to this day, regularly consulting with employers to ensure programs meet their specific needs. “The main thing is to listen,” says Mark Dreyfus. “Listen to what employers have to say. They will tell you what skills they are seeking for entry-level hires. We have become what we are by listening.” Over the years, that philosophy has manifested itself in the form of academic advisory boards – one for each program at each campus – that meet twice yearly.

By listening to employers, ECPI University has expanded and evolved over the past 50 years, offering programs specifically-linked to the demands of the employment marketplace. The original campus in Norfolk, Virginia relocated to Virginia Beach with additional campuses opening in Newport News, Richmond, Roanoke, and Northern Virginia. As time passed, six more campuses opened in North and South Carolina. Programs were also added, first in health science, then in business, criminal justice, and the culinary arts.

ECPI University has emerged as a leader in the career education sector, defined by its commitment to hands-on learning, superior student services, flexible scheduling, accelerated degrees, and relationships with strategic partners. ECPI University is accredited by the Commission on Colleges of the Southern Association of Colleges and Schools to award associate, baccalaureate, and master degrees and diploma programs.

Most notably, ECPI University maintains very important ties with some of the nation’s leading employers. Its strategic partnerships provide the dual benefit of maintaining academic integrity and value for graduates uniquely-qualified to meet employer needs. It’s an approach to education that has stood the test of time.

From Humble Beginnings to Nationally-Recognized Excellence

Currently ranked number one in the nation for non-traditional colleges as Best for Vets by Military Times in its annual survey, ECPI University has collected a litany of honors, including a number of national rankings, and is a STEM JobsSM Approved College. While those accolades are appreciated, the greatest honor lies in touching the lives of so many graduates.

In the words of Mr. Alfred Dreyfus, “I like to think that I’ve made a difference in people’s lives. That makes me very happy.”

Be the first to comment on "Our Founder, Alfred Dreyfus: A Man with a Vision for Career Education"