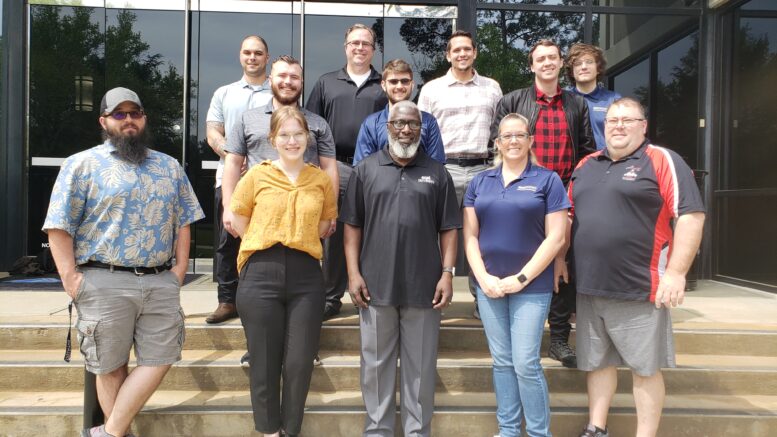 Over 1,000 teams competed in this 32-hour continuous event, with participants logging in from all around the country.

Wicked6 is a fundraising event for the Women’s Society of Cyberjutsu, a nonprofit organization promoting women in cybersecurity careers. To compete, each team was required to have at least one woman on their team—and ECPI University’s team proudly had two female competitors!

ECPI University Cyber and Information Security Professor Chris Flanery has worked in Cybersecurity over 20 years and coached the Columbia team for the past five years. Most of this year’s team was new to competing, and were recruited directly from their freshman orientation.

“They are a strong, dedicated group,” Flanery said of the Columbia Cyber team, ‘D0wn the L1ne.’ “They train a lot and are more hungry than any of the teams I’ve had.”

It’s a team effort when it comes to training. Coach Flanery, previous team members and the remaining experienced players all pitch in to educate the new teammates. It helps to have the research and documentation from past season’s players.

In addition to first place in the main event, ECPI University’s Columbia team took second and third place in the individual ICS Range competition, and the top 12 spots in the Google, SimSpace, SecureWorks, and SANS competitions.

“What I’m able to do through the cyber team is to give back what I’ve learned,” said the coach. “It’s my opportunity to try to grow as many cyber students as I can.”

Aside from the fun, games, learning and networking, competitions such like Wicked6 truly benefit the cybersecurity students who participate. During a real hacking, the victim is hit from every angle. The students experience this exact sensation during the competition, as other teams work to find and exploit any vulnerability in their network. The high stakes and urgency mimic real-life hacking, when private data is at risk.

ECPI University lives up to its reputation of ‘learning by doing,’ even with a little friendly competition. “It teaches them to defend against, and reverse engineer, malware,” said Flanery. “Competitions get our students ready for their career.”

“We are extremely proud of D0wn the L1ine and their Wicked6 win,” says longtime ECPI University Columbia Campus President Jim Rund. “This team consistently excels because our cyber program not only educates, it trains students by exposing them to what attackers are doing, how to protect against it and how they can be compromised. Competitions sharpen cybersecurity skills and enables our students to hit the ground running as industry professionals.”

D0wn the L1ine moved on to compete at the Palmetto Cyber Defense Competition at the Exchange Park in North Charleston on April 9-11. 2022, performing well against cyber competitors.

ECPI University is designated by The National Security Agency and the Department of Homeland Security as a National Center of Academic Excellence in Cyber Defense Education (CAE-CDE) for the Bachelor of Science in Computer and Information Science: Cyber and Information Security Technology major, Cybersecurity Track.

A Work of Heart: ALS Patient Bonds with Student Nurses

Be the first to comment on "ECPI University Cyber Champions Take First Place Out of 1,000 Teams"