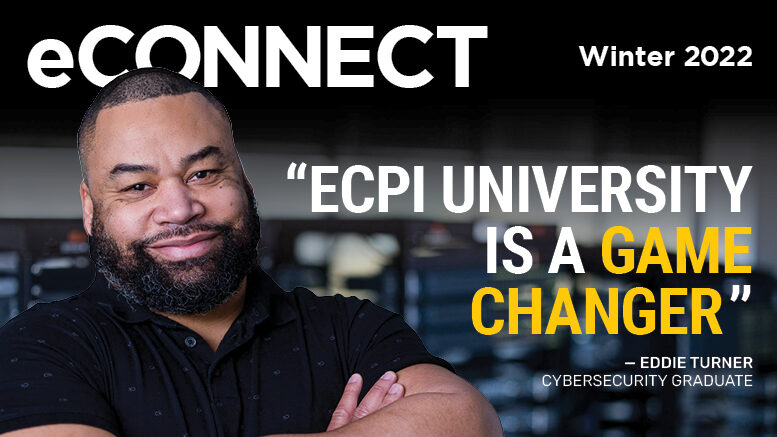 His passion for cars took him into his first career in the auto industry. Working on tires, wheels, lift kits and more, Eddie became the go-to guy in his trade, working 12-14 hour days as first a car mechanic and then a manager. But he missed seeing his family; his hours were long and he felt like he was always working.

One day, when an old friend of Eddie’s pulled up to his auto shop in a shiny Corvette, his curiosity was piqued. Eddie learned his buddy had gone back to school at ECPI University, graduated and now had a successful career in cybersecurity. “He told me that day: ‘if I can do it, you can do it.’ I’d heard other people talk about ECPI, but I saw the proof in the pudding,” said Eddie.

Eddie didn’t have far to look for other ECPI success stories. His wife is a local pediatric oncology nurse and ECPI grad, and his sister-in-law is a graduate as well. And when his son’s middle school soccer coach took his first phone call inquiry in admissions, “there was just a trust factor there,” said Eddie. “I see all these people around me that are successful, and this is what they have in common. So I came in on a Monday, signed up and was in class two weeks later.”

It was important to Eddie to get his bachelor’s degree in cybersecurity as fast as he could. “I’m older and I was ready to just get it done. I did it in 2.5 years, just like the commercials,” he said. “At first I started out on campus, but then Covid hit, and I had to transition to remote. It’s still hands-on learning, even if you’re in front of the computer. If you show up, listen and put in the effort, you’re good to go. The pandemic was only a hiccup for a very short time.”

When Eddie ran into any issues, he had his ECPI village ready to help. “The staff has worked in the industry and they tell it how it is. When I needed it, my professor would meet with me before and after class,” said Eddie. “It was like magic and he showed me how to be a magician.”

Eddie graduated in June 2021 with his bachelor’s degree. “The first step is the degree. The second step is the certification, and I’ve been able to get five of them now. The third is experience,” he said. His first job in the industry was at the MCI help desk, while he waited for his security clearance to come through.

“I went from nobody to everybody knocking on my door. I’m a network administrator for the Coast Guard now, and I have a four-day workweek. I get holidays off. It pays more. And I have more time on my hands to spend with my family.”

Eddie is already enrolled and working on his master’s degree. “For the job and life I wanted, I definitely needed a degree. My life made me hungry, and when I got here, I was ready to eat.”

What advice would Eddie give other students thinking about getting their degree here?  “ECPI University is a game changer. What are you waiting for? Come on in. They will help you get where you want to go.”