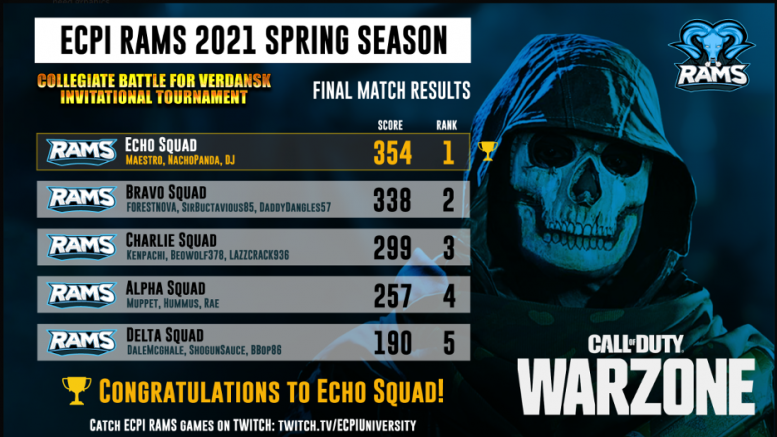 The ECPI University Rams competed in the spring season of the ECAC (Eastern Coast Athletic Conference) League of Legends Spring CLoL Partner Conference and finished in 9th place overall with a solid 3-2 win record. With impressive wins over Sacred Heart University, Roger Williams University, and Concord University, the Rams once again showed how strong our team is in the ECAC Conference. We ultimately lost the last match of the season against SUNY Canton University, and therefore missed a bid to the playoffs, but that should not take anything away from the LoL team who worked very hard this winter to prepare and then performed so well in regular season play! We are extremely proud of this team for their success and fortitude.

The Call of Duty team finished the Collegiate Battle for Verdansk, and ECHO Squad has claimed the victory by a narrow margin of just 16 points! BRAVO Squad had a solid second place finish, followed by Charlie, Alpha, and Delta squads respectively. This was the first in many CoD tournaments that the RAMS competed in, and we will also be running many CoD events over the summer for ALL students and players alike. Be sure to watch your inbox, the RAMS Social Media, and Discord server for more information.

As many of you know, you can watch all of the exciting esports action on the ECPI Rams Twitch.tv/ecpiuniversity channel. Coach Matthew Howard leads the broadcast team that is made up entirely of ECPI University students who work on casting the show, producing the show, interviewing coaches and players, creating graphics for the stream, and so much more. We are extremely proud of this component of our esports program as they have earned a TOP 5 ranking in all of the collegiate streams in the country that compete in NACE (National Association of Collegiate Esports). Many of these students are also players on certain games, but some just work on the stream team as their primary role on the team. Be sure to check out all of the ECPI Rams esports action and cheer your fellow ECPI University students on at twitch.tv/ecpiuniversity!

We have summer tryouts right around the corner (July 2021), but don’t worry, you don’t have to wait that long if you want to try out sooner. Just visit www.ecpi.edu/esports/tryouts and schedule your tryout today!

The ECPI Rams are looking for players at all skill levels, so don’t be shy. If you love esports and want to be part of a team that represents ECPI University in competition against other colleges and universities, this is your chance!  We also always need more help with broadcasting, social media, and team administration, so feel free to setup your tryout today if you want to help in those areas as well.