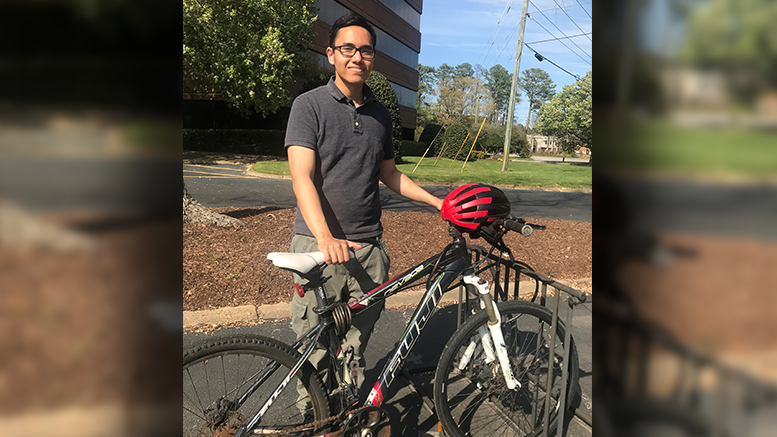 Most everyone has heard stories from parents and grandparents about the miles they would walk through snow and rain to attend school as children. Those stories, for the most part, are a thing of the past. Yet, there are still those who will endure most any hardship for the opportunity to earn an education. John Paul Hipolito is one those rare individuals. A Cyber and Information Security graduate from the Virginia Beach campus, John Paul has earned both his Associate’s and Bachelor’s, and is currently pursuing a Master’s degree.

Now working at the campus’ IT department, John Paul has spent the past four years arriving to and from campus on his own power. That’s because he does not have a driver’s license. It’s not that he didn’t want one. He simply didn’t have enough money to pay for tuition and a car, all at the same time. So, no matter what the weather – hot, cold, wet or dry – he makes the 45 minute journey each day.

“When I look at him now and the responsibilities he has assumed, I can barely even remember that young, shy student. Always polite and a joy to meet first thing in the morning, he helped pick up my day with a simple hello! John Paul is a great example of the capabilities of young men who are mentored in a supportive environment.”

“He once rode his bike in the middle of the summer to the convention center, which is about 12 miles from his house, to accept a scholarship,” says his boss, Virginia Beach Campus IT Director Christopher Craig. “He arrived there soaking wet from sweat, then promptly went to the restroom with his backpack and changed into some clean clothes to accept the scholarship. He never asked for a ride, even though it was 90+ degrees outside.”

That kind of dedication typifies what most people see when they’re around John Paul. “He’s an excellent student and an incredible person…one of the nicest individuals I have ever met,” says Campus CIS Program Director Scott Gibson. “An incredibly sharp young man, he listens to all the information and is able to apply it effortlessly. You can tell he has the drive to accomplish a goal, and will do everything he can to achieve it.  He went from zero knowledge in cybersecurity to one of the students others go to for advice and tutoring.”

In fact, many who taught John Paul say watching his progress over the past several years has been a privilege. “I am proud to consider myself one of the many mentors that John Paul has at this campus,” says Cyber and Information Security faculty member Joe Blow. “I met a young, shy man lacking confidence, but was eager to learn. We encouraged him to join different clubs and learn to speak up and out for himself.

“I made him team leader whenever possible, and I always teamed him up with older ex-military students who knew when and if he needed direction. When I look at him now and the responsibilities he has assumed, I can barely even remember that young, shy student. Always polite and a joy to meet first thing in the morning, he helped pick up my day with a simple hello!

John Paul is a great example of the capabilities of young men who are mentored in a supportive environment. I guess it does take a village to raise a young man.”

Now 22 years old and gainfully employed, John Paul is preparing to take his driver’s license exam and will be begin looking for a car. “That will be really nice,” he says. “I won’t have to get up so early in the morning to make it to campus on time, and I will be protected from bad weather. Most importantly, I can begin going to places that were too far to reach on my bicycle!”

Be the first to comment on "From Two Wheels to Four"