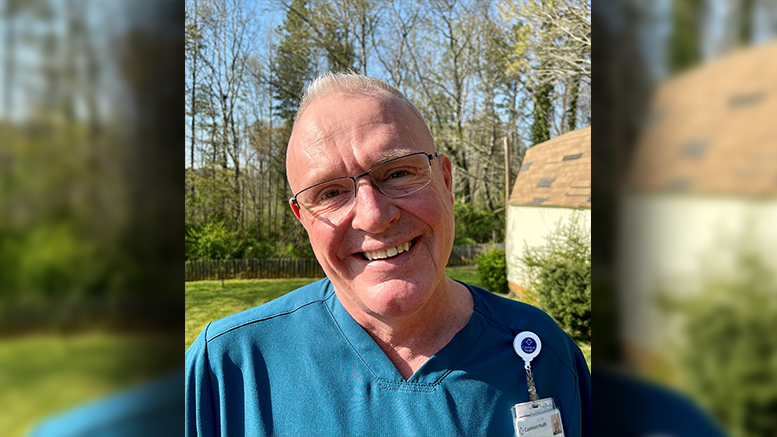 Leslie Lingren had spent most of his life in California when his husband, Clifford, was transferred by his employer to Charlotte, North Carolina in 2012. Not surprisingly, it was an adjustment. A cosmologist by trade, Leslie had trouble finding work and found it difficult getting used to a different culture. Six years later, those challenges would seem minor by comparison when Clifford took his own life. At that time, Leslie had no job and was unable to support himself financially. He knew this was going to be a turning a point in his life.

“My experiences have given me great compassion for the human condition. ECPI was personally life changing. I think it’s because it’s a small campus that makes it possible to meet and get to know a lot of people and the access to the faculty make it very personal. Sort of like a big family.”

“I knew I needed to chart a new career path,” says Leslie. “I had always been attracted to healthcare, but that, of course, meant going back to school and I had never been scholastically oriented. I tried college once, but flunked out. One thing I did learn about myself since then is that I am most definitely a tactile learner. When I learned about ECPI University and its hands-on approach to learning, I thought this just might work.”

Leslie enrolled in the Medical Assisting program at the Charlotte campus. At first, he was overwhelmed. “My academic advisor and program director gave me a lot of support to help get me through some tough times,” he says. “My professors really took interest in helping me succeed. They could tell that I was really weighed down emotionally. I was still grieving Clifford’s loss. They could see I was in a different place emotionally and pointed out things I could do to get through the hard days.

“One day, my program director asked us if we would be willing to be a part of a personal experiment. It was not required; it was only a question. She encouraged us to write down three things we were grateful for every day for 28 days. I accepted the challenge, and each day I mindfully wrote down those three things that I was grateful for. Each week, I turned them in like any assignment and by the end of the 28 days, it had become a life-changing experience; I learned to always come from a place of gratitude and this helps me be a better human, employee, and caregiver. But I will say that every instructor taught me well and I am in place now that has given me success.”

Leslie earned his degree in October 2020 and was offered a position with Caromont Health. During the past several months, his primary focus has been COVID, having personally administered more than 7,000 vaccines so far. “Company management brings their family members to me to personally vaccinate,” he says. “Of course, no one is aware that I’ve only been a Certified Medical Assistant for less than six months. I may have less experience, but I have the skills to be successful. ECPI gave me the tools and it’s now my turn to take this as far as I know I can.

“It’s amazing the influence we have on others, just being ourselves. My experiences have given me great compassion for the human condition. ECPI was personally life changing. I think it’s because it’s a small campus that makes it possible to meet and get to know a lot of people and the access to the faculty make it very personal. Sort of like a big family.”

His Secret to Success: Hard Work