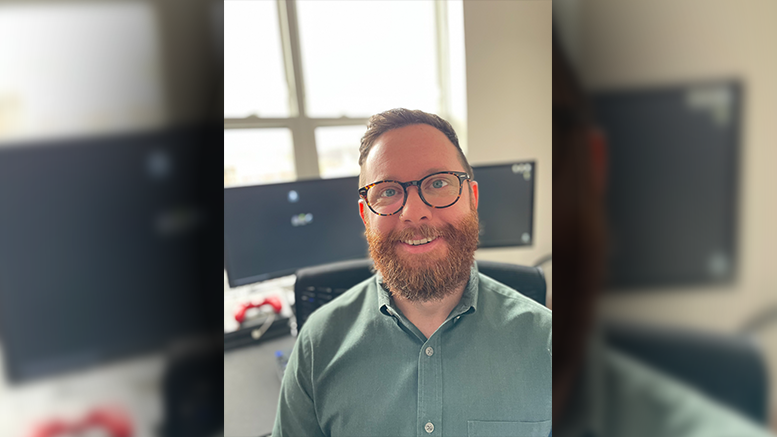 For Tyler Magnuson, the path to professional happiness has been a long, and sometimes difficult one. After high school, the Chattanooga native had no idea what he wanted to do; he just wanted to get out of Tennessee. So, he joined the Navy and went on to become a combat medic, subsequently doing two long tours on the frontlines in Afghanistan.

“My last year in the Navy was absolutely the most miserable part of my entire life,” says Tyler. “I was lost and depressed and wanted to get out. I was thinking that there has got to be more to this life than this, and I have got to find it. Still, getting out of the Navy was hands-down the most terrifying thing I have ever done. The military is the definition of job security.”

“That part of my life was not only the most educational, but also important in terms of growth and learning about myself. I was hungry and determined to make it. The faculty, specifically Joe Blow, Anibal Rios, and Dr. Harris, made my experience life-changing. Those people are fantastic humans and world-class educators. I would not be where I am today if it were not for them.”

Tyler began his post-military life working as a personal trainer with a clientele comprised mostly of sailors. So when the Navy had a big deployment, he lost many of them and found himself in financial straits. That’s when one of his remaining clients, an ECPI University graduate, gave him some advice that would change his entire life. “I told him that I was going to be homeless unless I figured something out and he said to me, ‘Tyler, shut the hell up, you’re going to go to school for Cybersecurity and you are going to blow it away. You’re going to be fine, brother.’”

As it turned out, Tyler’s friend was right. From the moment he began his studies, he knew he had found his purpose. “I wanted something that was challenging, something that I knew absolutely nothing about, and there was something about cybersecurity that was calling to me,” he says. “I wanted a career where there was room for growth and to do some cool stuff. Sure, the money was good, but I was mostly attracted to the idea of working with a bunch of nerds because nerds are smart people and the best way to develop yourself is to be around the kind of people that bring out the best in you.

“That part of my life was not only the most educational, but also important in terms of growth and learning about myself. I was hungry and determined to make it. The faculty, specifically Joe Blow, Anibal Rios, and Dr. Harris, made my experience life changing. Those people are fantastic humans and world-class educators. I would not be where I am today if it were not for them.”

Now, this former medic finds himself in a whole different kind of combat, protecting his fellow Tennesseans and everyone else served by the Tennessee Valley Authority (TVA) which provides electricity through hydroelectric dams and nuclear power plants across seven states, the kind of facilities that are prime targets for terrorists and hackers. Now one year into the COVID-19 pandemic, the TVA’s facilities are being targeted with even greater frequency. Why?  “Remote work solutions, hands down,” says Tyler, “Users are the main vulnerability. You’re taking a massive workforce that for years has worked on site – and all of that sensitive data had been kept on premises – and you’re taking it all to people’s homes.

“We are seeing entire software suites being migrated to the cloud and taking cybersecurity teams out of the on-site SOC and putting them at home and telling them ‘do your job’ and then sending your other employees home as well, people who often have little experience with security, and telling them to work from home. The pandemic has not only caused more attacks, but it’s also exponentially increased the attack surface. Being a member of the Incident Response Team, I am responsible for managing and monitoring one of three lanes; host, network, and email which encompasses over tens of thousands of devices and thousands of employees that work remotely every day.”

Given all the dams and nuclear facilities managed by the TVA, the cybersecurity team must be exceedingly vigilant. They face daily attacks and the consequences of failure are almost unimaginable. As Tyler puts it, “if those are breached, hello Chernobyl and massive flooding.”

How ECPI University Changed and Saved My Life