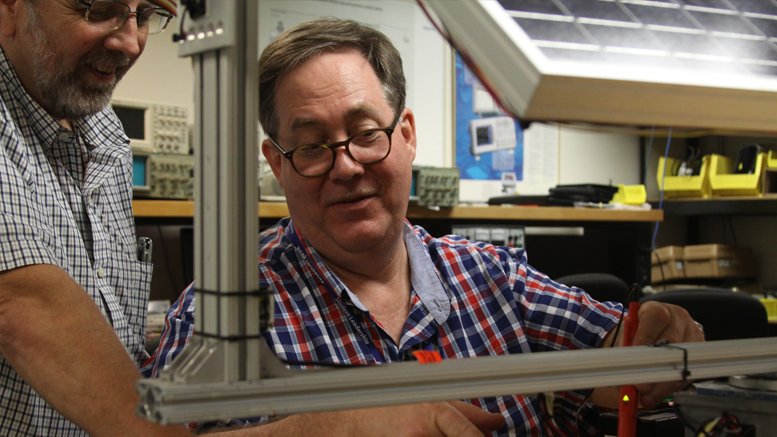 Greenville campus Physics and EET instructor Dr. Ben Davis pushes students to extend their ideas beyond the classroom, and in 2021, one enterprising and philanthropic pupil will take his work all the way to Haiti. For Richard Romanuk, what started as a prototype in EET 411 will become an innovative means of providing power for a hurricane-torn area in his wife’s parents’ native country.

Romanuk’s in-laws now reside in Florida, but through them, he has become involved in humanitarian efforts in Haiti—most recently, the clean-up that followed Hurricane Matthew in 2016. Romanuk described the cistern in the area as a cesspool and noted that the people there typically cook only with wood, as Americans do when camping. “They have to bring the water into huts and boil it before they can drink it. Until you see it, you can’t fathom the poverty,” he said.

“The sun is free. We just have to find a way to help them channel it so they can have some of the things we take for granted.”

Romanuk, who is a member of the Student Leadership Council and served as president of the Greenville campus’ Golden Key Honor Society chapter, earned a certificate in electronic engineering technology approximately 20 years ago and went on to enjoy a highly successful and multifaceted career leading managerial and technical teams. From the moment he determined to get a bachelor’s degree from ECPI, he said he wanted to continue to challenge himself and has spared no effort. His wife’s career warranted his transfer to ECPI University’s Raleigh campus in November, but he remains in contact with Davis and is devoted to his ongoing senior project. Essentially, he has mounted a large solar panel on a set of motors to track the sun across the sky. This will optimize the panel’s power output and store excess power in a battery for later use (at night or in cloudy conditions). Romanuk explained that 90 percent of the units will not be mounted on the roof but fixed on the ground at a 45-degree angle.

“Solar panels are at their peak only when they’re perpendicular to the sun. What I’m building will tilt the panels, allowing them to adjust and stay perpendicular throughout the day,” he said.

Romanuk will be focusing on a church and its associated school, College Evangelique Baptiste Emmanuel de Bombardopolis. In addition to helping rebuild the church after the hurricane, he has sponsored students who attend the small institution that accommodates about 50. The solar panels will ultimately provide electrical power to the church, the school and four homes for the pastor, caretaker, and two instructors. This will require multiple units that can be installed over time, but even a few reading lamps would be a welcome improvement.

Just as he purchased water for the relief missions, Romanuk is covering the expense of the solar panel—and he is building the “X-Y axis” mounts and controls. He hopes to get some assistance with funding, as eventually, upgrades could lead to sufficient electricity for cooking, heating and other functions.

In anticipation of the trip to Haiti, Romanuk will do some precise planning for efficient transport of materials. “Everything I use down there—every last tool—will have to be shipped, probably in a 20-foot container. It’s not like I can call a contractor with a backhoe once I get there,” he said.

Davis noted that the lack of resources on the island makes the portable, self-contained panels a good solution. When asked what role his teacher played in the process, Romanuk was quick to reply “savior.” Davis, who was recently named ECPI Greenville’s Faculty Member of the Year, holds a Ph.D. in nuclear astrophysics and has 20 years of experience as a programmer and machine engineer. Insisting that his student’s skills and determination were the driving force, Davis said he provided back-up on the software side, helping Romanuk write the code—in C programming language via Arduino Controller—that will maximize the reception of signal from the four directional light sensors by moving the panel.

To ensure his design will survive a hurricane, Romanuk will take extra measures. Barometric pressure sensors will be added to rotate the panels to a safe position in the event of extreme conditions. “I’ve over-engineered the crap out of it,” he said. “It will be able to take sustained winds of 150 miles an hour.”

Once everything is set up in Haiti, the panel assemblies will be anchored by a quarter-inch thick aluminum plate, and the bases will be secured with 10-inch steel rebar driven at least eight feet into the ground. Since there is cellular service in the area, Romanuk will be able to monitor them from his home in the United States via security cameras. The units will be surrounded by both a traditional fence and an electric one.

“The sun is free,” Romanuk said. “We just have to find a way to help them channel it so they can have some of the things we take for granted.”