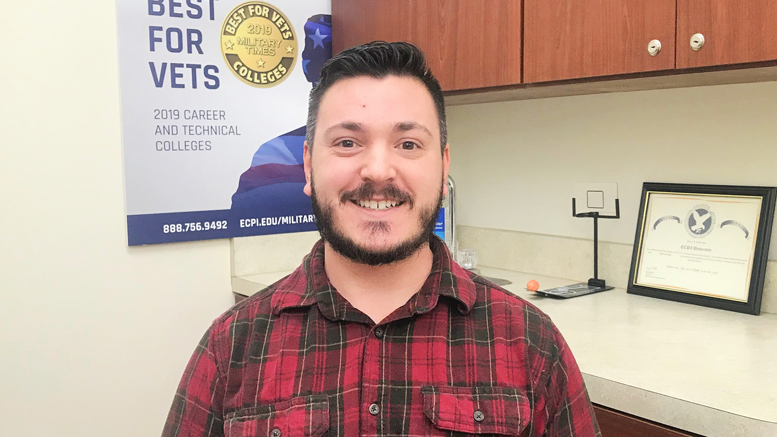 From a fairly early age, Jordan Clemens knew he wanted to be a dentist. Everything about the profession fascinated him. After graduating from high school, he began studying integrative physiology at the University of Colorado in Boulder. Unfortunately, one year into his program the money ran out.

With no way to fund his education, Jordan decided to join the Navy and get his education paid for through the G.I. Bill. After four years in uniform, he is now working on his bachelor’s degree at ECPI University’s Virginia Beach campus. He chose ECPI because of its accelerated schedule. “With just one year of college under my belt, I did not want to spend a whole lot of time working on my undergraduate degree,” he says. “I just want to get it done as soon as possible so I can move on to dental school.”

Because Jordan had already taken the prerequisite classes needed for dental school, he decided to earn his degree in Business Administration with a Concentration in IT Management. “I want to have my own practice,” he says. “To do that successfully, you really need to have some serious business acumen, plus dentistry is going hi-tech, so this degree will really allow me to stay on top of my game once I begin practicing.”

In addition to his studies, Jordan has also been active in the Virginia Beach campus chapter of Student Veterans of America (SVA), currently serving as vice president, and recently returned from SVA’s national convention in Los Angeles. “It was very informative,” says Jordan. “We really focused on helping veterans make the transition to the civilian world, not just with job skills, but also helping them adjust their mindset.

“In the military, you get things done based on authority, someone of a higher rank closely directing people under them to get things done. In the civilian world, there’s a lot more collaboration required and the formal hierarchy is far more nuanced.”

Toward that end, Jordan says he wants to work to foster more interaction on campus between veterans and the rest of the student body. He also wants to see more collaboration with other SVA chapters throughout Virginia. This September, he plans to lead a delegation of veterans to a statewide conference, the first of its kind.

Of course, there are some aspects of military life that apply quite well to both the classroom and the civilian workplace. Jordan’s advice to new student veterans: “Make a plan, do the job, and do it right.”