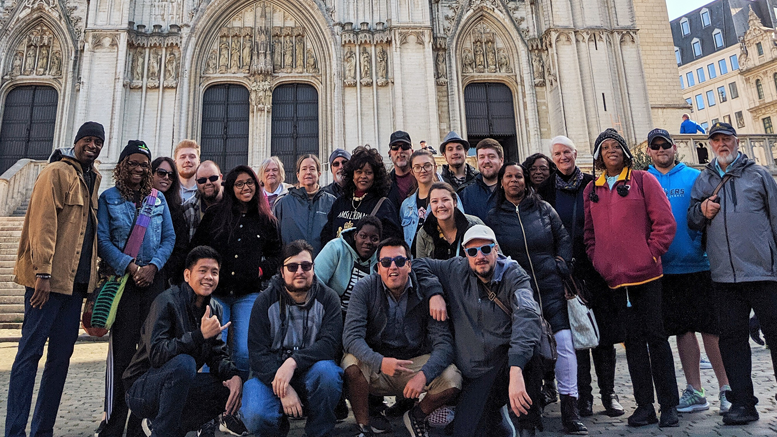 In keeping with our mission to educate students about some of the world’s most historic and meaningful destinations, ECPI University’s Study Abroad program recently returned from a tour of The Netherlands, Brussels, France, and United Kingdom. Our journey began in the bustling city of Amsterdam, an incredibly diverse and beautiful city rich in history and culture, and home to some of the most iconic architecture, symbols, and cuisine on the planet. We started at the Anne Frank House where three different Jewish families hid for more than two years during World War II and where Frank’s famous diaries were discovered after she and her family were deported to concentration camps.

Then, it was on to Rijksmuseum, Amsterdam’s most popular art museum opened in 1885 to house William V’s personal art collection. It now holds an impressive collection of Rembrandts, Vermeers, and other Dutch masters, plus an extensive collection of Asian and decorative arts.
From Amsterdam, we made our way to see old-fashioned Holland.  We visited the tiny fishing town of Volendam, a short trip away from Amsterdam, where we saw old-style Dutch houses, narrow streets, and villagers who still dress in traditional Dutch costumes. We visited Zaanse Schans and saw miles of the windmills for which Holland is famous; we learned about clog-making, cheese and chocolate making, and other Dutch cultural traditions along the way, including trying warm, delicious Stroopwafels.

Next, we visited the wonderful city of Brussels, Belgium, home of Belgian Waffles, gourmet chocolate, and authentic French Fries. Brussels combines Hapsburg-era elegance with modern business and big-city bustle. We saw the city’s historical heart on a walking tour over cobblestone streets in  Grand-Place, a central square lined with ornamental gables, medieval banners, and gilded façades. For most people this would be enough to say that they had a great time in Europe, but our experience was far from over.

We then went to Paris, France, the nation’s capital and one of the most beautiful cities on earth.  Paris is a hotspot of fine cuisine, high fashion, and breathtaking architecture. We saw The Arc de Triomphe, commissioned by Napoleon in 1806 after his victory at Austerlitz, as well as some of the most famous French sites, including the 19th-century Opera house, the Presidential residence, the Place de la Concorde, where we saw the Obelisk of Luxor, a gift from Egypt in 1836, and the Place Vendôme, a huge square surrounded by 17th-century buildings.  We explored the iconic Eiffel Tower, built for the 1889 World’s Fair to commemorate the centenary of the French Revolution. Finally, we visited the Louvre, the world’s largest art museum.

Lastly, we took the Eurostar high speed rail from Paris into the heart of London. In this city of nearly seven million, we walked along the Thames River and explored Trafalgar Square and bustling Piccadilly Circus, followed by a traditional Fish and Chips dinner. The next day we visited prehistoric Stonehenge, built in 3,000 BC, a mysterious monument of four concentric rings of hefty stones, believed to be a sacred place of worship or some type of calendar, then on to Bath, England’s most fashionable spa town in the 18th century.

This was a truly memorable experience and my hope is that more people take advantage of ECPI University’s Study Abroad Program. As coordinator, I highly recommend this wonderful once in a lifetime experience. This is your chance to see the world in a very unique and unforgettable way with your University classmates, family, and friends. Get your passport and let’s start traveling. The world is waiting on you. Let’s see it together.This October, we are traveling to Greece. All students and alumni, as well as their family and friends, are eligible to go on the trip. If you are interested in this opportunity, please contact me via email at afowlkes@ecpi.edu for more information and details.