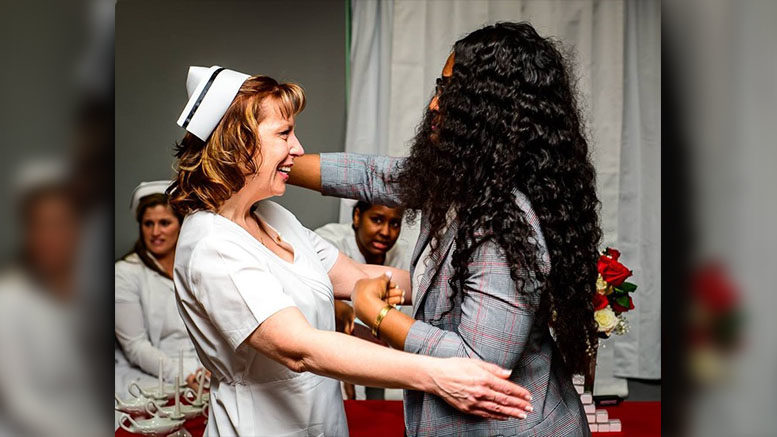 Something good coming from something bad…it’s a familiar sentiment many people use to make sense out of tragedy. For Northern Virginia nursing student Kathy Wales, that notion fails to fully capture the depth of her loss and how it redirected her life.

It all began when her son, 9-year-old Alex, fell one evening, cut his face, and needed stitches. In the emergency room, he became agitated and confused. He wasn’t acting like himself. Something else was wrong.

To be on the safe side, doctors ordered an MRI and found a spot on Alex’s brain. After an initial diagnosis of a Torch infection, a second opinion yielded a much different and devastating conclusion. Alex had a terminal disease, Adrenoleukodystrophy or ALD, an extremely rare disorder with a wide range of symptoms which includes aggressive behavior, vision problems, difficulty swallowing, and poor coordination. The typical rate of progression ends with total disability within a few years.

“We were told that there was nothing we could do,” says Kathy. “They recommended that we go home, buy a video camera, and enjoy the time we had left with him.” Click To Tweet

“We were told that there was nothing we could do,” says Kathy. “They recommended that we go home, buy a video camera, and enjoy the time we had left with him.” For Kathy, that was unacceptable. She began searching for every expert in the field – there were quite few – and found that there was a treatment that involved a bone marrow transplant.

There was a brief glimmer of hope when the family learned that Alex’s brother, Zach, was a match. However, further testing showed that he too had ALD, but was asymptomatic. From that point forward, Kathy devoted every spare moment to Alex’s care, even leaving her job with the Air Force. She was tireless in researching the disease, gaining the respect and admiration of Alex’s medical team, while still making life as normal as possible for the entire family.

In one sense, those efforts did pay off, in that various treatments extended Alex’s life by about seven years, but it could not alter the ultimate outcome. After Alex passed, Kathy was determined to make things better for parents and families like hers.

“There is a whole world full of caregivers who are struggling,” she says. “As a special needs parent, you don’t have the time or energy to fight to improve things because it’s all spent taking care of your child and just getting through the day. There are no case managers to guide you through the healthcare system when you have a rare disease like ALD. You learn what you can, where you can. There are just some huge gaps in the system and I want to fix that.”

“There are no case managers to guide you through the healthcare system when you have a rare disease like ALD. You learn what you can, where you can. There are just some huge gaps in the system and I want to fix that.” ~Kathy Wales, Nursing… Click To Tweet

Kathy tried to find some type of organization she could join that could help solve problems for other medically complex children. A nurse at Children’s Hospital told her, “We don’t have anything like that here…you’d probably have to be a nurse to do anything like that.” Shortly thereafter, Kathy enrolled at the Northern Virginia campus in Manassas and began working on her nursing degree.

Just months later, Kathy’s world was shattered once again. Her only remaining child, Zach, at the age of 20, took his own life. Grief stricken, he knew he might suffer the same fate as his brother. At the memorial service, several people told Kathy how proud Zach was of her for going to school, something he had never voiced to his parents.

Kathy says that during this time her teachers were very supportive and made it clear that there would be a place for her as soon as she was ready to return. With incredible strength and resolve, she came back the next term.

Kathy earned her degree and is now a working nurse, graduating with an impressive 3.5 GPA, and as a member of Phi Theta Kappa and the National Student Nursing Association. At her pinning ceremony, faculty member Dr. Erika Jones-Foster told Kathy, “Your boys made you a great nurse.”  Kathy says that was one of the nicest things anyone has ever said to her. “She is a great teacher. I could not have done this without her. She’s one of the most positive people I know.”

Be the first to comment on "Nursing Graduate’s Sad, Inspiring, and Unlikely Career Path"