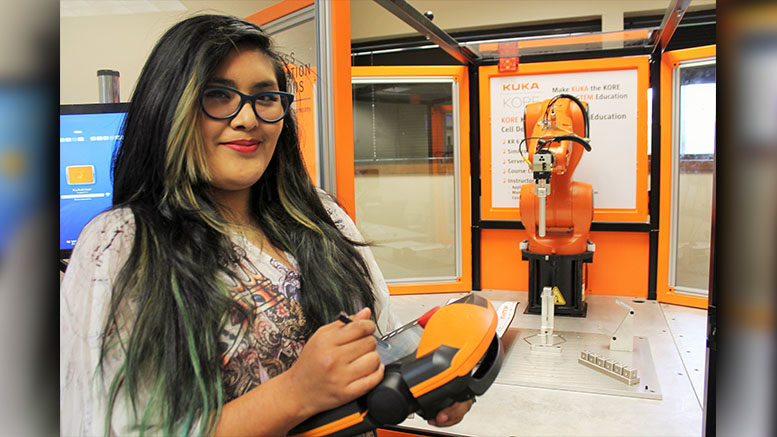 Jessica Leon-Grande has always been a dreamer. The Urban League of the Upstate acknowledged that in 2017 with their Dreamer Scholarship, but her lofty thoughts about becoming an engineer started long before that.

“Everyone thinks I wanted to go into this field because my dad is a mechanical engineer, but I got the idea from ‘Star Trek.’ My life ambition when I was a kid was to become chief engineer of the starship ‘Enterprise,’” Leon-Grande said.

By the time she entered high school, Leon-Grande, who just earned her Mechatronics degree, knew she had to pursue something more realistic, a “workplace that actually existed,” so she aimed to parlay her love for animals into a career as a veterinarian. Although research told her veterinary medicine was not for her, she’s rescued and cared for countless animals. Currently, there are 35 non-human residents on the Leon-Grande “farm,” which houses turkeys, geese, chickens, dogs, cats, and fish.

“I want to push the world of mechatronics in areas like agriculture. Here in South Carolina where the weather fluctuates so wildly, there’s so much opportunity to help workers and industry,” she said. Click To Tweet

As she enters the workforce this summer, Leon-Grande’s initial goal is to learn as much as she can about a variety of industries. Ultimately, she wants to use her knowledge of mechatronics to improve life for laborers and the environment. “I want to push the world of mechatronics in areas like agriculture. Here in South Carolina where the weather fluctuates so wildly, there’s so much opportunity to help workers and industry,” she said.

Just as she wants to make a difference, Leon-Grande says ECPI has transformed her. Her life was already changing in high school as she was diagnosed with fibromyalgia. Pain management was a factor in her early departure from high school, but that was contingent upon her enrolling in college almost immediately. In fact, her last high school exam took place on the same day as ECPI’s orientation, where she was the youngest freshman at age 17. She continued to serve as the lead technician on her high school’s D2 Stageworks theater program and eventually skipped one day of college class to graduate from high school, which she did as a 5-Star Thespian in the International Thespian Society.

Leon-Grande, a member of ECPI University’s Student Leadership Association and student representative to the community’s Academic Advisory Board for Mechatronics, noted that most people evolve during college, but the last few years have been even more remarkable for her. She’s had intensive training in a profession she loves and earned certifications in specialty areas such as KUKA robotics.

She may not work on a starship or another planet, but the ECPI faculty all agree that she is ready to change the world. Click To Tweet

“ECPI has the most amazing pairing of an accelerated schedule and a laid-back atmosphere,” Leon-Grande said. “My experience has been so much more than the courses in my major though. One of the psychology teachers helped me get into a mindset of managing my condition. The social development has been just as important as the intellectual development. I’m not the same person I was when I started.” Through it all, Leon-Grande remains a dreamer. She may not work on a starship or another planet, but the ECPI faculty all agree that she is ready to change the world.