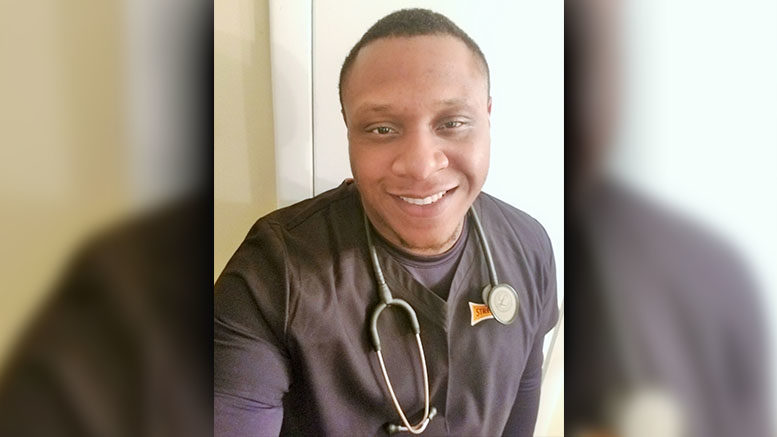 Nursing graduate Ronald Parker is living proof that long odds do not always determine the outcome. A very difficult childhood and the experience of war might have been enough to derail most people. Ronald, however, was resilient.

When he was just 10 years old, Ronald’s mother gave him up to foster care, along with his four other siblings. Being the oldest among them, he begged the case manager to keep them all together, but they ended up being separated and each was forced to endure treatment no child should ever experience. “My foster mother beat me just about every day,” he says. “My sister and brothers’ foster mother abused them as well. It was horrible.”

That went on for two years. All the while, Ronald’s aunt was fighting to gain custody of all five children and was ultimately successful. “That woman is my hero,” he says. “She was only 20-years old, just a kid herself. I don’t know many people who would have done what she did. She is why I do what I do.”

With his aunt’s support and encouragement, Ronald became the first in his family to graduate from high school. He joined the Navy and became an Aviation Ordnanceman, and was eventually deployed to Fallujah where he and his unit frequently came under heavy fire, leaving him with memories he would prefer to erase. After being medically discharged, he returned home to Columbia, South Carolina. “I had no idea what I was going to do,” he says. “I was almost 30-years old and suffering from PTSD. The military was all I knew. Now, I was just sitting at home trying to figure out how to get out of my own head.”

“I was almost 30-years old and suffering from PTSD. The military was all I knew. Now, I was just sitting at home trying to figure out how to get out of my own head.” Click To Tweet

Then, Ronald’s sister made a suggestion. She was a nurse and had graduated from ECPI University. She encouraged him to visit the Columbia campus and explore some career options. Eventually, he too enrolled in the nursing program. At first, however, he was not as committed as he knew he should have been.

“I was using college as a way to escape,” he says. “Fortunately, I was in a school that really knows how to work with vets. I joined Student Veterans of America (SVA), and we have a vet center right on campus. There’s always someone there, so if I was having a rough day, there was always someone I could talk to, someone who knew just how I felt.

“I eventually got on track, but I have to say that nursing school was the toughest thing I ever did. I had shot people and dodged bullets, but this was something different altogether. I don’t know what I would have done without the support I found there, between the SVA, faculty, even the receptionist…it was a real family atmosphere.”

I don’t know what I would have done without the support I found there, between the SVA, faculty, even the receptionist…it was a real family atmosphere.” Click To Tweet

Nonetheless, there were still times when Ronald had his doubts. That changed forever when he entered a veteran care facility to begin his first clinical rotation. “When I started caring for fellow veterans, I realized that I had found my calling.”

Now a graduate, Ronald says he’s just getting started. He has a job, and plans to continue his education and become a registered nurse, and eventually, a physician assistant. His brother and sisters have also fulfilled their aunt’s greatest hopes. In addition to his sister, the nurse, his other sister just earned her accounting degree, and he has a brother who is a successful recruiter in the U.S. Navy. Improbable? Yes. Impossible? Far from it.

Chef Hangs Up His Apron for Cybersecurity Career