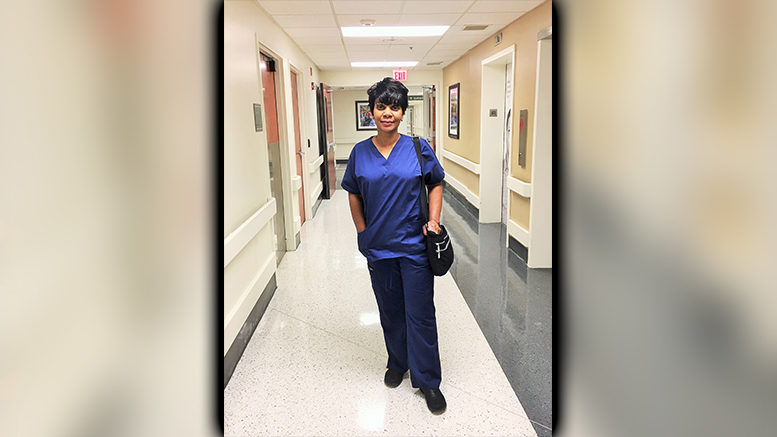 When Carrie Dunson was a little girl, she dreamed of becoming a nurse. “I used to pull out one of those big volumes of the old World Book Encyclopedia and read all about Florence Nightingale,” says Carrie. “I wanted to be her!”

But, as Carrie says, life got in the way. After high school, she spent three years in the military. When she came back to Richmond, she found a job with the U.S. Postal Service. Not just any job. She became a mail handler, one of the people in the back who move around those 70- to 80-pound bags of mail. Until Carrie arrived, that was a man’s job. She became the first woman in the city to do this sort of work. “I loved the idea of being the first, and I did my job with pride,” she says.

[Tweet “She became the first woman in the city to do this sort of work.”]

It wasn’t like Carrie had abandoned her dream of becoming a nurse. She did take some college courses along the way, but raising a growing family while working full time was a bit more than she bargained for.

Eventually, time and toil began to take their toll. After three years in the military and three decades as a postal worker, her body was beginning to ache. She knew she would have to make a change. And what better change than pursuing her lifelong dream?

So at age 57, Carrie began looking at schools and soon found herself at ECPI University’s Richmond/Moorefield campus. In just over a year, she could earn a Medical Assisting degree. Though excited to begin, she was reluctant to share her plans.

[Tweet “”In the past, my family knew how upsetting it was for me when I dropped out, so I didn’t want to disappoint them,””]

“In the past, my family knew how upsetting it was for me when I dropped out, so I didn’t want to disappoint them,” she says. “This time, I just wanted to keep it to myself. Out of my seven brothers and sisters, I had just one brother who got a college degree. None of my own children had a college degree and now my grandchildren were beginning to reach college age. I’m like, somebody’s got to do this!”

This time, it was different. Carrie successfully completed the program, crediting the support of the faculty and her advisors for helping her fulfill a dream. “They truly wanted me to succeed. I could see how much they cared.”

[Tweet ““They truly wanted me to succeed. I could see how much they cared.””]

With a 3.77 GPA and a job offer from her externship site under her belt, it was time for Carrie to let the family in on the big secret. “I invited everyone to dinner,” she says. “I went into the other room, put on my scrubs, grabbed my dean’s list certificate, and returned to make the big the announcement. It was a wonderful evening.”

Carrie is hopeful that her accomplishment will serve as an example for the whole family. “I really do hope this will inspire my grandchildren to go on to college and put some acronyms alongside their names, and not be satisfied with just a high school diploma alone.”

Making their Mark in the World: ECPI University Making a Difference