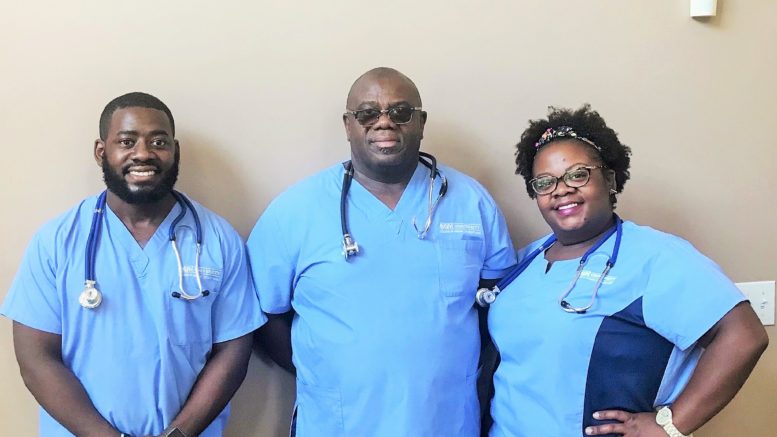 It had been more than three decades since Micheal Capers graduated from college. A business major at the University of South Carolina, he had been working in management for the past 20 years. His son – also named Michael, with a slight variation in spelling – also went to USC and was about to earn a sociology degree. But as he was about to finish, he realized he wanted something else. He was restless, and unbeknownst to him, so was his father.

Big Micheal needed a change. His wife was a nurse, and her work always sounded so interesting. Little Michael began showing interest in nursing as well. He began doing some research and was drawn to the year-round, accelerated program offered at ECPI University. “When I told my dad that I had made an appointment for the next day, he said, ‘that’s great and I’m coming with you,’” says Michael.

[Tweet “He began doing some research and was drawn to the year-round, accelerated program offered at ECPI University.”]

After a campus tour and a little soul searching, both decided to enroll. “I figured now was the time to take action, and to do it with my son would make the experience even better,” says Micheal. Not long after, his daughter, Michaella, decided she would join them. She had been doing administrative work at Palmetto Health and was ready to jump to the clinical side. “I saw how well they were doing and how much they enjoyed it,” she says. “Palmetto Health is part of ECPI University’s Education Partnership Program, so I decided this was the perfect time.”

Now, a little more than a year after they began, father and son have graduated. And Michaella is not far behind. “I can’t believe how quickly we were able to do this,” says Michael. “The whole experience was great, from beginning to end. The classes were small, so we got a lot of individual attention. Plus, you could tell the faculty really wanted to make sure we retained what we were learning, and not just trying to remember it for the next test.

[Tweet ““Each day is different and I really like that. It keeps you sharp throughout your entire career.””]

“I am so glad I was able to do this with my dad and sister. School is hard. Sometimes, it’s not so easy getting out of bed in the morning. It can be hard to stay focused. Sharing this journey with family has made all the difference. We support each other and keep each other motivated.”

As father and son prepare to take the National Council Licensure Examination (NCLEX), Michael is eager to begin his new career. He says he knows he made the right choice. “Each day is different and I really like that. It keeps you sharp throughout your entire career. People’s lives are on the line, so you have to stay on top of your game.”