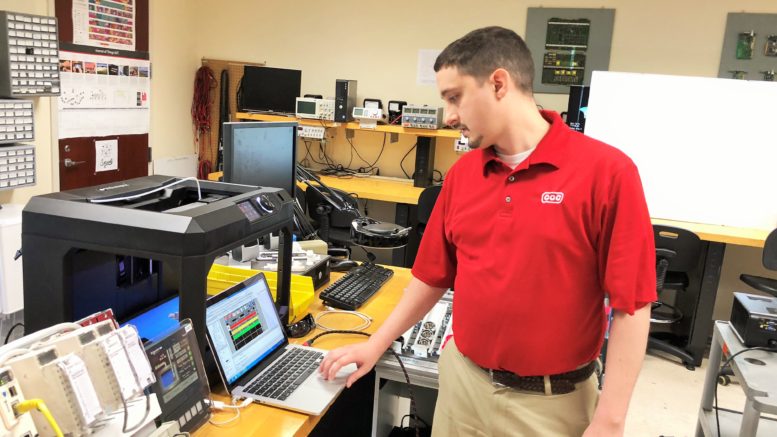 Jason Halbritter and Tom Foss both went to the same high school in Chesterfield County, Virginia.  After receiving their diplomas, they both joined the Army, and were even assigned to the same unit. After six years in the military, they both returned to civilian life.

Tom enrolled at a local community college where he majored in social work. “I was stuck in boring and menial jobs that paid very little and was only making enough to barely get by,” he says. “Career wise, it just wasn’t working out for me.” Nor was it going particularly well for his friend, Jason. So, he and Tom decided they each needed a new career path.

After visiting ECPI University’s Richmond/Moorefield campus, they were impressed with the Mechatronics program and both decided to enroll. “I was really into robotics and I saw that automation was the way the world was moving,” says Tom.

[Tweet “We most definitely motivated each other to keep going!”]

Jason and Tom each believe that enrolling with a friend comes with many benefits. “One of the biggest ones was the support,” Tom says. “If one of us was out sick, the other one could take notes. We most definitely motivated each other to keep going! There were situations where we tutored each other, as we had different strengths in the topics we took in class. I would encourage anyone to refer the friends they would like to go to school with if they think they would be a good fit for ECPI.”

Faculty members agree. “Academically, things are often easier when you have a study partner,” says Dr. Paul Nussbaum, Electronics Engineering Technology faculty member at the Richmond/Moorefield campus. “Pursuing a degree with a friend means you have someone there you can talk to, who will tell it to you straight, and understands your situation. It can help smooth those bumps in the road, and make things more fun!”

[Tweet “Academically, things are often easier when you have a study partner.”]

After graduating in 2015, Tom and Jason – not so surprisingly – went to work for the same company, Commonwealth Controls Corporation. Tom says ECPI University helped him develop the precise skill set he needed to do his job. “They covered everything from motor drives and statics and dynamics to programmable logic controllers (PLC),” says Tom. “Without those classes, I would not be able to do my job today – and I probably would not have made it past the first interview!”

In addition to their work at Commonwealth Controls, Tom and Jason have co-founded Flex Robotics, a company that focuses on what’s called telepresence or the live remote control of robots. Tom recently got married and he and Jason have each purchased houses.

“ECPI University gave me exactly what I needed to have a great career,” says Tom. “The professors were very knowledgeable, and it was thanks to them and my career service advisor that I was able to land a great job. I love the work, and my job and salary have given me the stability I need to start a family.”

Culinary Competition Series at Culinary Institute of Virginia: Best of the Bites

Graduation Speaker is Inspired by Lord of the Rings Novels