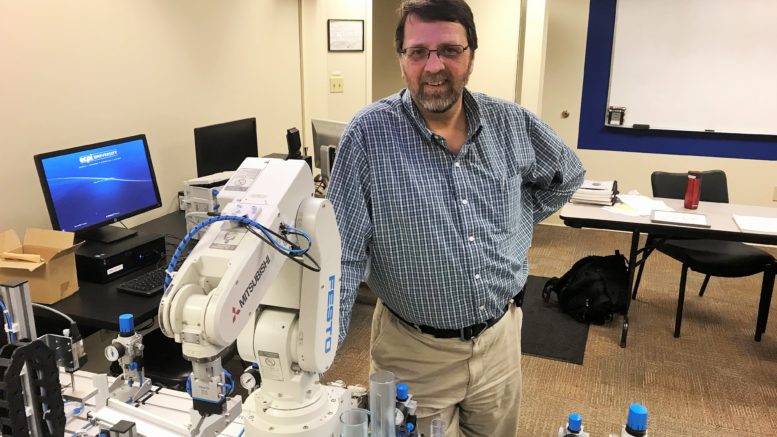 When it comes to curious minds, it’s hard to top Dr. Ben Davis. If it has anything to do with science or technology, he’s all in. “I’m interested in everything,” he says. “My background in physics has given me a great deal of professional flexibility because physics forms the building blocks for just about any technical endeavor.”

With a Ph.D. in Nuclear Physics from Notre Dame, Dr. Davis has been able to use his educational background to pursue a wide-ranging career path, having worked as an electrical engineering manager, software developer, and engineering programmer. At one point, he had retired, but has found that teaching fulfills him in ways he did not anticipate. “I will never forget the first time I built something,” he says. “It was an automated machine that was used to test the air brake systems on New York City subway cars. It was the biggest thrill and I enjoy seeing my students experience that same thrill when they build something for the first time.”

[Tweet “It was the biggest thrill and I enjoy seeing my students experience that same thrill when they build something for the first time.”]

Why do you enjoy teaching?

“I’ve honestly never really thought about it before just now… as I consider that question, I now realize that it’s almost a social experience for me. I was helping my fellow students with computer science, physics, and math homework even when I was a freshman back in 1983. Teaching has always been a way for me to bond with people, be they peers, bosses or subordinates. Taking that a step further, I tend to like and respect people that are eager to learn. You can probably infer my attitude toward people who aren’t interested in learning.”

[Tweet “Taking that a step further, I tend to like and respect people that are eager to learn.”]

Please share an experience you had as a teacher that was especially memorable.

“The most recent was when I was teaching Circuits 2 last year. I’d been promising the students that if I were doing my job right, circuit analysis would eventually be more than just rote steps to follow. At some point, they’d get an intuitive understanding of how the voltages added up and the currents split between the branches. When they got there, it would be like riding a bike and they’d remember it forever. I must have told them that 10 times. Three weeks into the class, we were going over a problem when one of the students got this big smile on his face and shouted, ‘I get it! I ACTUALLY it get now.’ The look on his face was classic. Cookbook procedures work, but true understanding is the real goal. It’s not something that can be faked. You know it when you see it, and it’s a very satisfying thing when you see someone attain that.”

Be the first to comment on "Physics Faculty Member from Greenville Campus: Dr. Ben Davis"