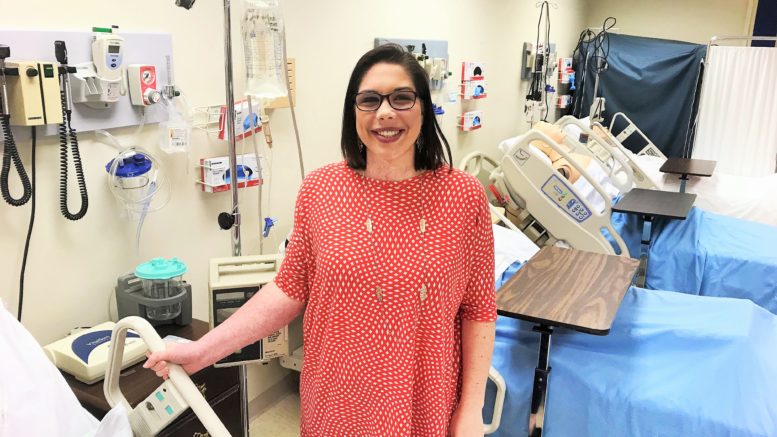 For Ashlan Burns, the healthcare environment is a very familiar setting. That’s because she has been surrounded by healthcare workers her entire life. Ashlan was born with Sturge-Weber syndrome, a neurological disorder identified at birth by a port-wine stain birthmark on the forehead and upper eyelid. While that mark can be erased through laser surgery, the underlying issues associated with this disease are far more challenging.

Those with Sturge-Weber syndrome have abnormal blood vessels on the brain surface, along with a loss of nerve cells and calcification of underlying tissue in the cerebral cortex of the brain. This results in a wide range of symptoms that include developmental delays, cognitive impairment, and glaucoma.

[Tweet “Ashlan did indeed graduate from high school…with a 4.0 grade point average, then went on to graduate from nursing school with a 3.5 GPA.”]

These tremendous accomplishments did not come without cost. To date, Ashlan has endured more than 40 surgeries, and has spent 10 years of her life as a patient at Shriner’s Hospital. To minimize lost school days, most of her operations were scheduled during summer and Christmas breaks. “Celebrating Christmas at the hospital sort of became normal to me,” she says.

Yet for everything she lost, Ashlan says she has gained so much more. In 8th grade, she began volunteering at Shriner’s Hospital. That, along with her experience as a patient, cemented her desire to pursue a career in healthcare. “I have been given this disease so that I can be understanding enough to help other people,” says Ashlan. “There is so much more to healthcare than just clinical procedure. Compassion and empathy when genuinely expressed has its own healing properties.”

Shortly after Ashlan got married, her Navy husband was assigned to a new duty station in Charleston. Symptoms from Sturge-Weber syndrome had slowed her down a bit, so the rapid pace of full-time nursing had to be set aside for the moment. Then, she learned about an adjunct faculty position at ECPI University and was hired. And when her husband was later assigned to Norfolk Naval Base, she was able to begin teaching at ECPI University’s nearby Virginia Beach campus. Now with her husband no longer on active duty, they – along with their new baby daughter – have returned home to Greenville where she’s working at her third ECPI University campus, this time as clinical coordinator.

[Tweet “When I was in the classroom, it was like magic when you see someone reach that ‘aha moment,’”]

Please share an experience you had as a teacher that was especially memorable.

“When I was in the classroom, it was like magic when you see someone reach that ‘aha moment,’ when something really difficult has finally sunk in and they now own that information…that’s pretty hard to beat. Now as the clinical coordinator, I get to serve students in many ways, from helping them complete clinical requirements and extra tutoring, to finding and providing amazing clinical rotations that allows them to connect what they are learning in the classroom to the real world. I am very passionate about providing our community with compassionate, safe, and competent nurses who make a difference.”

Be the first to comment on "Clinical Coordinator at the Greenville Campus: Ashlan Burns"