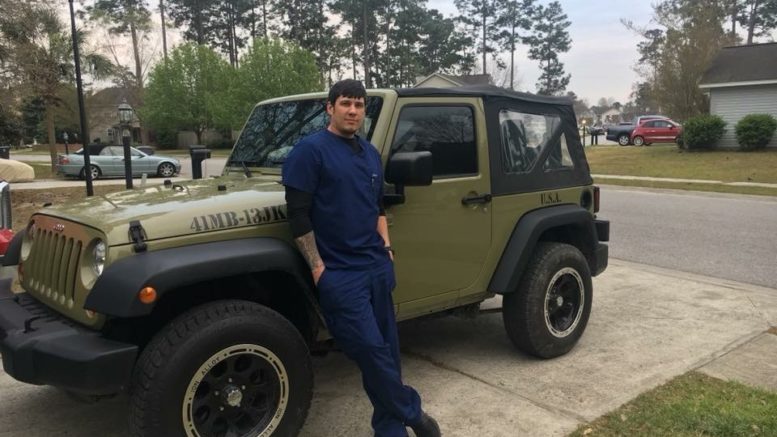 After two tours of duty in Iraq and eight years in the Army, Nicholas Roberson decided he was ready for civilian life. It was not a decision that came easily. An Army Ranger, he was proud to serve his country and knew finding similar career satisfaction would not be easy. “I really enjoyed being part of something bigger than me and working as a team,” he says. And that’s why his first job as a civilian was a bit of a letdown.

With a wife and two children, Nicholas had to find work right away. So, he taught himself pipe welding and the family moved to Charleston, South Carolina. His new job paid the bills, but did not provide the kind of personal fulfillment he was looking for. After some soul searching, he decided that he really wanted to become a nurse. “Strange as it sounds, it really offered me the kind of satisfaction I got from the Army,” he says. “Nursing is life and death, you are part of something bigger than yourself, and you most certainly work together as a team.”

[Tweet ““I really enjoyed being part of something bigger than me and working as a team,” he says.”]

When Nicholas began looking at nursing schools, he checked in with the local community college and found they had a two-year waiting list, despite the fact that South Carolina is in the midst of a significant nursing shortage. “I did not want to wait that long,” he says. “I felt like if I didn’t make a change then and there, I was going to be a pipe welder the rest of my life.” As it turns out, his wife learned that ECPI University was expanding its Nursing (ADN) program in Charleston. Nicholas came in, passed the entrance exam, and soon after, he enrolled.

[Tweet “Nicholas graduated with a 3.5 GPA and had a job waiting for him in the emergency department at a local hospital.”]

Earlier this year, Nicholas graduated with a 3.5 GPA and had a job waiting for him in the emergency department at a local hospital. “I couldn’t be happier with my decision,” he says. “Making the switch to civilian life is a big deal. I know some vets worry about what’s waiting for them, but all I can say is don’t be scared to take a chance. Just go out and do it.”