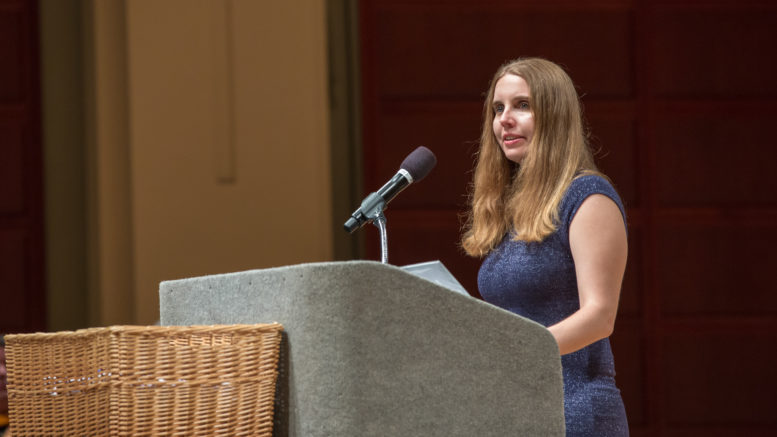 Christy Long is a Cisco Certified Network Professional. She works as a Cyber Threat Analyst for the nation’s 10th largest bank, specializing in risk management, regulatory compliance, security solutions architecture, training, and investigating cyber incidents. She serves as the Assistant Conference Director and Membership Director of the Raleigh Chapter of the Information Systems Security Association. She’s also the CFO of a small simulation and video game design company. Guess what? She graduated from ECPI University just one year ago.

“When it comes to Christy Long, words like ‘impressive’ seem to fall flat,” says ECPI University Campus Director of Student Affairs Gloria Hicks. “She epitomizes what we try to instill in every student – a sense of intellectual curiosity and a dedication to lifelong learning.”

Christy’s path to her current job was hardly a traditional one. She’s a former a former Army medic who served in Afghanistan. When she left the service, her plan was to stick with medicine and become a physician assistant. Before that could happen, a friend convinced her to take a free computer class.

[Tweet “She’s a former a former Army medic who served in Afghanistan.”]

“I started without any knowledge of computers,” says Christy. “My goal was to improve my efficiency and overall knowledge of technology. As the class continued, I thought to myself, this is fun. My interest in computers began to grow. I compared the human anatomy to computers.  The wires were the nervous system; the CPU was the brain. I was able to take all of the new terms and translate them into a language I understood.” She was hooked.

Christy began studying on her own and soon earned her CCNA (Cisco Certified Network Associate) – something many professionals earn only after they’ve gone to college. She accepted a part-time helpdesk job with a company in Raleigh and enrolled at ECPI University. While still in school, she earned four more professional certifications – Security+, A+, Network+, and Windows 7 Configuration. She finished her program at ECPI with a 4.0 GPA, then quickly earned her CCNP (Cisco Certified Network Professional), just in time to apply for a job with Cisco – which she got.

Now working for BB&T, her story continues to unfold. She shared her experiences with graduates at this year’s commencement in Raleigh, North Carolina. To those far removed, her accomplishments may seem like that of a superstar, but Christy says it’s all there for the taking – for those willing to put in the work.

[Tweet ““Educators love it when you ask questions,” says Christy.”]

Her advice to graduates mirrors exactly what she, herself, has done thus far: Earn certifications as soon as possible, get a part-time job in their chosen profession while still in school, and ask for help. “Educators love it when you ask questions,” says Christy. “It shows them you’re engaged and committed. Success is not all that complicated. It’s straightforward. There are no shortcuts. Do the work.”

Reaching Out to Offer a Helping Hand, ECPI University Students at Work

She’s a single mother of two teenage boys, works full-time as a medical assistant, and is going to school to become a nurse. Consequently, it…

From the Battlefield to the Cyber Field