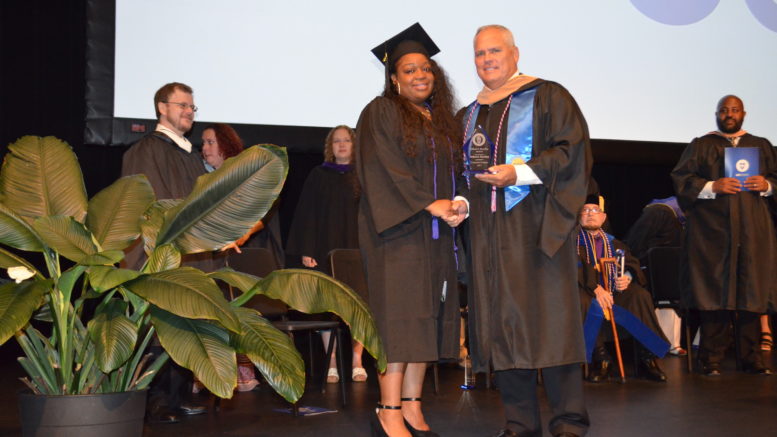 Perseverance is a trait that is highly prized by employers, and when visiting any ECPI University campus, it can be found in abundant supply. In addition to their professional skills, many ECPI graduates have overcome great obstacles to reach their goals. Some, however, truly stand out. Such is the case for this year’s winner of the Alfred Dreyfus Award.

Named for ECPI University Founder Alfred Dreyfus – a man who escaped Nazi Germany and began a new life in America with just $14 in his pocket – it is given to the graduate who has persevered to overcome great obstacles to earn their degree. This year’s winner, Telisha Smiley, was nominated by medical assisting faculty member Veronica Frierson. These are the words Ms. Frierson wrote in nominating her:

“Telisha has shown tremendous dedication, perseverance, and fight throughout her program. This wasn’t easy for her. For many years now, she has been dealing with the challenge of caring for her nine-year-old son who has sickle cell anemia. Just during her time at ECPI alone, Telisha’s son has undergone six hospital admissions and surgeries. There were times when she would either be unable to attend class or have to leave early due to her son’s sudden illness. She and her husband would often tag-team this task, but it was difficult when a crisis came without warning.

“Her family lives about 35 miles from campus, and she was often required to drive home to drop her son off with a relative and then come back to class. Any other time, she would always be one of the first to arrive for class and the last to leave. I am sure there were moments when Telisha thought of quitting, but she stayed and she finished. Many times she would call instructors from her son’s hospital bedside to inquire about assignments to complete while she was there.

“Telisha is a daytime student but would often schedule evening and weekend time with her instructors to make up work, practice clinical skills, and take quizzes or exams. If you ask Telisha how she was able to do it, she will tell you that it was her faith in God, the support of her family, classmates, and dedicated ECPI University faculty members.

Telisha is graduating with multiple certifications, including CPR, Phlebotomy, EKG, and Electronic Health Records. She was hired by her extern site immediately after completing her externship – which came as no surprise to all who know her.

On Campus News and Events at Culinary Institute of Virginia