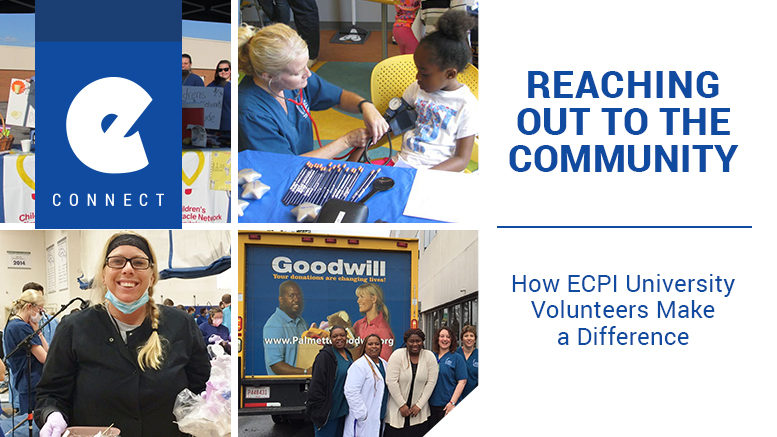 When Jeremy Seitz learned about a food drive at his son’s school, he felt compelled to help. A Network Security student at ECPI University’s Roanoke campus, he discovered that large numbers of nearby schoolchildren were returning home each weekend with little or no food waiting for them. He immediately organized an effort on campus to collect food items.

To be successful, Jeremy knew he had to get the whole campus involved. So, he persuaded five faculty and staff members to become contestants in a rather unconventional contest. For each food item donated, the donor could cast one vote. The candidate receiving the most votes would have to wear a bunny suit on campus all day and greet students as they arrived! It was a tremendous success, with nearly 9,000 items collected to help hungry children.

[Tweet “It was a tremendous success, with nearly 9,000 items collected to help hungry children.”]

This is just one example of the many events and activities that take place each month at ECPI University campuses across Virginia, North Carolina, South Carolina, and Florida. They offer students, faculty, and staff an opportunity to be part of something bigger than themselves, a chance to help others, and become campus leaders. Each one of these adds another patch to the cultural tapestry that embodies ECPI University.

“Volunteering provides our students a sense of community,” says Scott Warman, Student Success Coordinator at the Roanoke, Virginia Campus. “It teaches respect, empathy, and leadership. Our students have made a huge difference with their continued volunteer efforts at the local shelter, blood drives, JDRF Fight for the Cure, and the different food drives we have held, to name just a few.”

At the Virginia Beach campus, Nadine Newhart leads the annual Angel Tree campaign, sponsored by the Salvation Army. She’s been doing it every year since 1995. “I started out with about 25 angels and they were all snatched up, so I started getting 50 per year,” she says. “Everyone looks forward to it and starts asking about the angels around October! I never have a problem getting all our angels ‘adopted’ and we, as a whole, are very generous. On a personal level, I love doing this! I love knowing that even though we will never see the child receiving their gift, they will have a wonderful Christmas because people care.”

Establishing exact numbers can be allusive, but a review of volunteerism across all ECPI University campuses shows that collectively, more than 1,000 students, faculty, and staff members volunteer each year, totaling approximately 9,600 hours. These are more than mere numbers and the benefits extend well beyond those who are directly supported. Each person involved has a positive effect on their campus, its atmosphere, culture, and spirit.

[Tweet “A review of volunteerism across all ECPI University campuses shows that collectively, more than 1,000 students, faculty, and staff members volunteer each year, totaling approximately 9,600 hours”]

Volunteering touches everyone involved. The research bears this out. A report produced by Junior Achievement shows that organizations with active community outreach experience increased productivity and stakeholder loyalty. Other benefits include:

What’s more, volunteering has a significant impact on career development. A recent survey by Deloitte found that among respondents:

At ECPI University, this simply reinforces a long-held philosophy. Volunteering is part of the university’s cultural DNA. To learn more, check out eConnect’s Reaching Out section. It’s here to give readers a glimpse at some of the many activities happening on campus, and the people who make a difference each and every day.