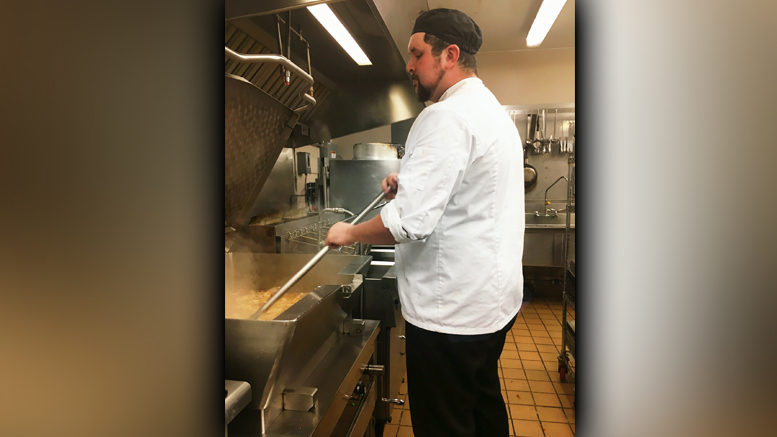 Eric Pierce: Always at Home in the Kitchen

Since the moment he turned 16, Eric Pierce has been working in kitchens. He began with fast food. A couple years later, he moved on to full-service restaurants. After finishing high school, he decided there was nothing on earth he would rather do. “There’s something about it,” says Eric. “It’s not like anything else. There’s a camaraderie in the kitchen that is different from other work environments.”

With his sights set on a culinary career, Eric knew he needed to go to school. The timing could not have been better. He lived in Virginia Beach where, at that moment, there were no culinary schools nearby. Shortly thereafter however, ECPI University announced it was opening its first culinary college, the Culinary Institute of Virginia (CIV).

“I was so excited and could not wait to get started,” says Eric. “Some people think about culinary school, and begin fantasizing about becoming a TV chef! I did not. I had been working in restaurants for several years, so I went in with my eyes wide open. I knew I would start at the bottom and have to earn my stripes. You don’t become a chef just by going to culinary school. You work long hours, weekends, and holidays. I wear that like a badge of honor! It’s not easy, but when you love cooking and you love being around a kitchen like I do, it’s more than worth it.”

[Tweet “It’s not easy, but when you love cooking and you love being around a kitchen like I do, it’s more than worth it.”]

Eric enrolled at CIV and soon discovered that school could actually be fun. “I enjoyed it from the moment I stepped on campus,” says Eric. “I had always hated school before and was easily distracted. Now that I was studying something that really interested me, I just couldn’t get enough of it. I was learning about things I had never even thought of before. My favorite class, by far, was meat fabrication. Knowing how to butcher an entire side of beef, understanding how each portion of the animal is best used – that’s an art form.”

Following graduation, Eric worked in several restaurants before joining Westminster-Canterbury, a senior living community in Virginia Beach. He began as a line shift supervisor and learned a great deal under an executive chef who would eventually play a big role in his career. That chef ended up taking a job with Hospital Housekeeping Systems, a company contracted to operate hospitals’ culinary and nutrition services. He hired Eric to become the sous chef at Southside Regional Medical Center in Petersburg, Virginia.

[Tweet “It was one of the best experiences of my life and put me on the path toward a wonderful career.”]

Eric excelled in this new role and was quickly promoted to executive chef at Greenbrier Medical Center in Ronceverte, West Virginia. He now manages all culinary operations for the hospital, including the cafeteria and patient meals, with special attention focused on patients with special dietary needs… not bad for someone who is just 29-years old. Eric attributes his success to hard work, but is quick to add that it all began with a decision to enroll at the Culinary Institute of Virginia. He says, “It was one of the best experiences of my life and put me on the path toward a wonderful career.”