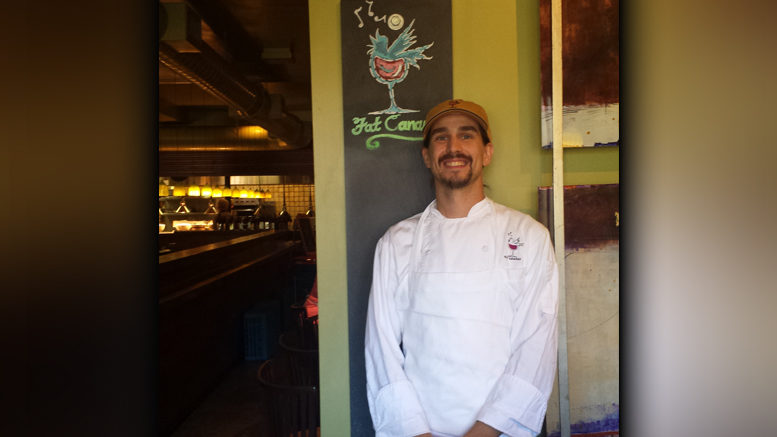 His career in the culinary arts began in the most unexpected of ways. At age 15, Colin Douglas had a CD and his friend wanted it. “I told him I would give it to him if he got me a job at his mother’s restaurant,” says Colin. Although Colin began by washing dishes, it wasn’t long before a cook called in sick and he jumped at the chance to fill in. From that point forward, he was hooked. “I am a high-energy person,” says Colin. “I don’t like to sit around. A busy kitchen is nothing but perpetual motion, and I like it that way.”

After graduating from high school, Colin went to college, but had no idea what he wanted to study. After taking general education classes for a couple years, he was no closer to figuring that out. All the while, he kept working part-time at local restaurants. One day at work, he met a couple of newly-hired cooks who had just completed culinary school. It was the first time Colin had worked alongside people who had been formally-trained. “That was an absolute revelation,” he says. “They could do things I had never even imagined. I decided right then and there that I wanted to go to culinary school.”

[Tweet “They could do things I had never even imagined. I decided right then and there that I wanted to go to culinary school.”]

At the time, there were no such schools in the Virginia Beach area, so Colin considered attending school out of town. Then, his father saw an article in the newspaper about a new culinary school – Culinary Institute of Virginia (CIV) – preparing to open in the neighboring city of Norfolk. Soon after, he enrolled. “It was an incredible experience,” says Colin. “CIV taught me everything I needed to know to launch my career.

“Working in the culinary field is not what a lot of people imagine. It’s all about acquiring fundamental skills that you can use after graduation to develop yourself into a first-rate chef. It’s essential you begin with a solid foundation in order to grow and develop. You’ve got to cook 10,000 duck breasts before you really know how to prepare them the right way.”

[Tweet “It’s essential you begin with a solid foundation in order to grow and develop.”]

Not long after graduation, Colin was offered an opportunity that transformed his career. He was hired to work at the Fat Canary, not only one of the finest restaurants in Williamsburg, Virginia, but also ranked by Open Table as one of the Top 100 Restaurants for Foodies. Colin is now the sous chef and recently hired a newly-minted CIV graduate who he says has a great desire to learn and is exactly the kind of person he would expect from the Culinary Institute of Virginia.

Eventually, Colin would like to start his own restaurant, but for now he is enjoying the opportunity to mentor young people which is a bit ironic since he himself is only 32 years old. Of course, that’s what happens when you start working at age 15. His advice for young culinarians: “Constantly work to perfect your skills, be engaged in everything you do at work, travel, and eat out whenever you can.”

Culinary Institute of Virginia Graduate: Always in Pursuit of Perfection