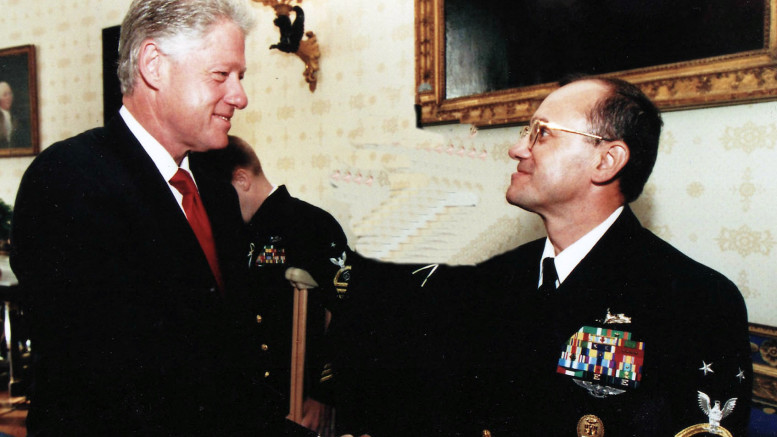 During his nearly 30- year career in the U.S. Navy, James Parlier enjoyed great success, yet suffered profound loss. As a hospital corpsman, he was on hand during the Beirut bombing in 1983 when 241 service members were killed. At the time, it was the deadliest single attack on Americans overseas since World War II.

Years later as Command Master Chief of the USS Cole, James once again confronted the awful specter of terrorism with the loss of 17 sailors and 40 more injured during the October 2000 attack in the Yemini port of Aden. And during Operation Desert Storm, his ship hit a mine, ripping a 16 by 20 foot hole in the hull, injuring four sailors. After receiving numerous military decorations for his courage, skill, and quick response, James decided to retire in 2006.

For a while, James worked as a Navy contractor but decided that he really wanted to return to healthcare and enrolled in the practical nursing program at ECPI University in Greensboro.

“James is a remarkable individual who is taking the opportunity to rebuild his life and soul,” says Thom Hodges, Director of Nursing at the Greensboro campus. “After much tragedy, he is now a student with great promise as a nurse. As James travels this journey, it will be filled with self-recovery and growth. I’m glad to be a part of his new life!”

[Tweet ““After much tragedy, he is now a student with great promise as a nurse. As James travels this journey, it will be filled with self-recovery and growth. I’m glad to be a part of his new life!””] While James is reluctant to talk about himself, much less those two fateful days, he is more than happy to share his life experience and leadership with students on campus. He believes it’s important to give back to the community and volunteers much of his spare time, with veteran’s organizations holding a special place in his heart.

“James brings a certain depth to our student body,” says Greensboro Campus Student Success Coordinator Scharlie Coleman. “Anyone that knows his personal and professional background cannot deny his strength to persevere. He understands the importance of hard work in order to accomplish a common goal. His determination and desire to create change in the world is nothing less than admirable.”

James’ ultimate goal is to become a traveling nurse and see the rest of the world that he has spent a great deal of his life protecting. “I feel I have been blessed to be given another chance to help others,” he says. “I plan to do this through mission work and give back to those who are less fortunate. I believe that becoming a nurse is just another mission to complete, no different than any of my previous Navy missions.”

[Tweet ““I feel I have been blessed to be given another chance to help others.””]