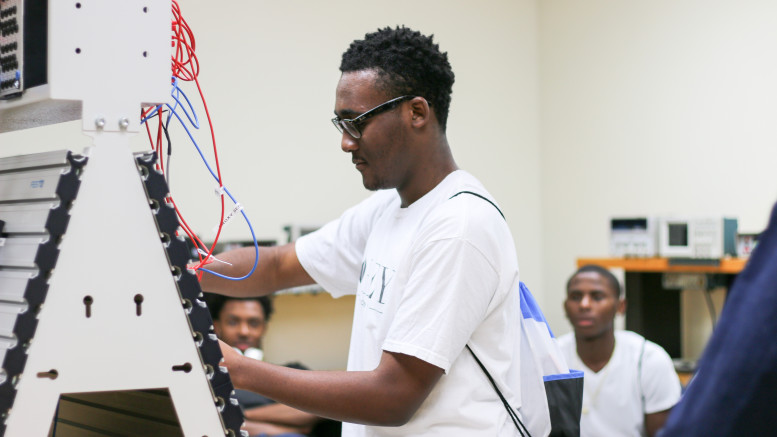 It may be the best career opportunity a great many people have never heard of. It’s manufacturing, and contrary to popular belief, it is alive and well right here in America. That’s the message of MFG DAY, an event hosted by ECPI University’s Virginia Beach campus and the Association for Manufacturing Excellence.

[Tweet ““When people get a close look at modern manufacturing, they discover a highly-technical environment filled with automated systems.””]

For more than 400 high school students and job seekers, it offered a firsthand look at what advanced manufacturing is all about, with dozens of manufacturers and industry supporters showcasing a vast array of robots and advanced technology.

A recent study by Deloitte projects that nearly 3.5 million manufacturing jobs in the United States must be filled by 2025, but only about 1.5 million people will possess the necessary skills to do the work. What remains is what’s called the “Skill Gap.” The industry is seeking workers skilled in such areas as electronics and mechanical engineering, as well as computer and information systems. Perhaps most prized by employers are people knowledgeable in all three areas, much like graduates of ECPI University’s Mechatronics program.

One of more than 2,000 similar events taking place throughout the nation during the month of October, the objective of MFG DAY is to dispel the myths that have prevented people from considering a career in manufacturing. While most people believe a strong manufacturing sector is vital to economic growth, they no longer consider it a viable career option. Now, however, with advanced automation and robotics, American companies can compete and win against cheap foreign labor.

Advanced manufacturing jobs also pay quite well. According to the Manufacturing Institute, average entry-level compensation for manufacturing engineers is nearly $60,000, and for manufacturing workers in the United States, it’s more than $77,000. So at MFG DAY, everyone not only got a clear picture of the future, but also learned how to get the education and training needed to gain entry into this growing field.

Be the first to comment on "MFG DAY Tackles Skills Gap, Puts Spotlight on Manufacturing & Robotics"