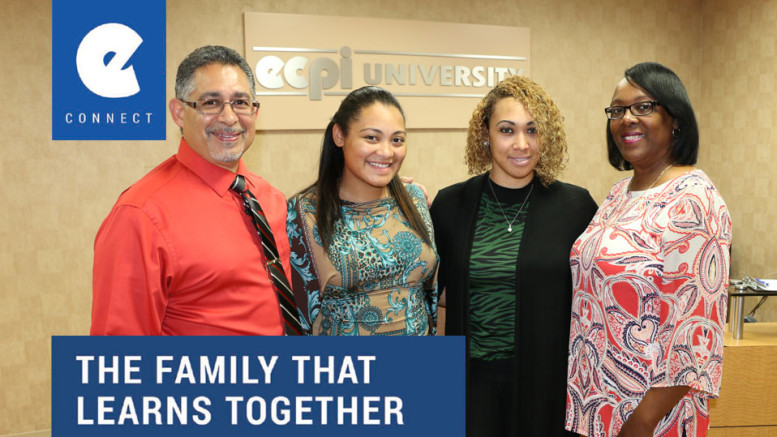 Juan Fonseca understands the value of learning. He was the first in his family to attend college and has used his education to support the transition from military to civilian life. An Air Force veteran, he first came to ECPI University’s Newport News campus in 2003 and every few years since then, another member of his family follows.

Juan’s daughter, Natara, graduated with a Bachelor’s degree in Business Administration with a concentration in IT Management and is now a telecommunications technician at the Department of Defense’s Joint Staff Command. Younger sister Selena enrolled last summer, and she too is pursuing the same degree path. Next up: mother Gloria, who is preparing to enroll in the business management program.

“The very first thing I noticed was the campus environment,” says Juan. “It’s very engaging. Faculty members are interested in more than just the subjects they teach; they care deeply about us as well.”

Gloria Fonseca sees the growth that has occurred beyond academics.

“I have two completely different daughters,” she says. “Natara is an extrovert, Selena an introvert. With small classes, lots of group projects and presentations, you can’t hide in the corner. You have to engage and ECPI University has really helped Selena come out of her shell. The faculty and staff really go out of their way to help the students grow. They’re like a second family to us.”

For Juan, it all comes down to outcomes. “I like that every week, the campus has a professional dress day,” he says. “It gets students thinking about how they present themselves once they graduate. The curriculum is top-notch and they’re always updating it to stay current with the needs of the workplace, but it’s what ECPI University does to prepare its students after graduation that really stands apart.”

Improve College Success: Master the Art of Reading Your Textbook