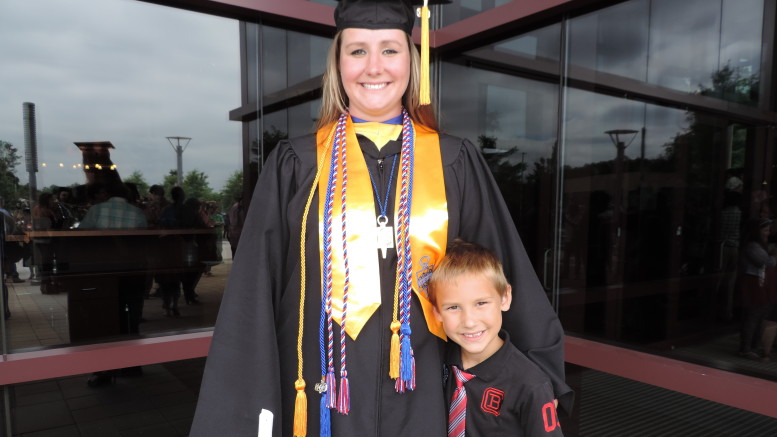 When Samanthia Silke joined the Navy right out of high school, she had big dreams. She wanted to experience something bigger than life in her beloved hometown of Front Royal, Virginia…and she wanted to go to college. While she was soon far away from home, completing college took longer than she ever planned.

After three years stationed in Whidbey Island, Washington, Samanthia was deployed to Bahrain. Then, a year and a half later, she was in a terrible accident. Left with a traumatic brain injury, broken wrist, tibia, and right knee, as well as three fractured vertebrae, she began two years of rehabilitation, facial reconstruction, and more than 15 surgeries on her leg alone.

Two and a half years ago, still in the midst of her recovery, Samanthia decided it was time to resume her education. She enrolled at ECPI University’s Northern Virginia campus to study criminal justice.

“Because I was still on the mend and my memory had not fully recovered at that point, I needed a school with small class sizes and lots of personal attention,” she says. “I certainly got that at ECPI University.

“The faculty was so helpful and supportive. Also, I wanted to learn from people who had worked in the criminal justice field and could relay personal experiences, not just what they read in a book. Again, I really got what I was looking for.”

This summer, she walked across the stage and accepted her Bachelor of Science degree. She had to take off work to do it, because she already has a job as an Advocate Supervisor for CASA – Court Appointed Special Advocates.

She and her team of 30 serve as advocates who work for the best interests of abused and neglected children in courtrooms and communities in both Prince William and Fauquier County, Virginia.

“It’s been a very long journey, but I am so grateful for the life I now have. It’s our job to be the voice for children when they don’t have one. This kind of work is rewarding beyond measure.”

[Tweet “It’s been a very long journey, but I am so grateful for the life I now have. #ECPIGrad”]

Be the first to comment on "From Bahrain to Northern Virginia, Grad Marks the End of a Long Road with Criminal Justice Degree"