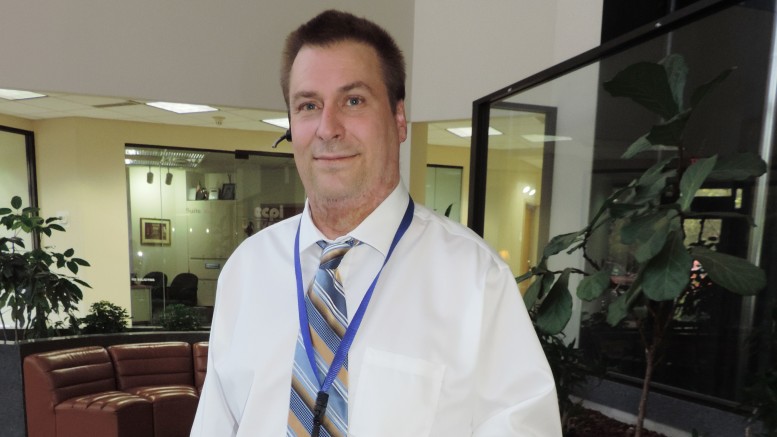 For Cliff Golby, even the simplest tasks can be daunting. Yet, he takes each challenge as it comes and works his way through it. That’s just the way he’s wired. Giving up is not an option.

That attitude has served him well since a fateful day in 2011 when he was working in his backyard and a gas can exploded in his hand. Engulfed by flames, he dove straight through the cover of his pool. Before the water could do its job, the vinyl was seared into his skin.

Cliff spent the next four months in a medically-induced coma, then more than a year in the hospital. Skin grafts helped his outward appearance but his nerves and tendons seemed unwilling to heal. Left with limited mobility in both arms and hands, he was unable to do the kind of things most of us take for granted. Picking up a glass, for instance, was out of the question.

Over time, Cliff made some progress but only now is his outlook really starting to improve. After battling his insurance company, he was able to receive a mechanical arm which fits right over his own. By using nerves near his elbow, he can command it to do most anything. “The doctor said it could take months to master this thing,” says Cliff, “but I have been working with it nonstop and have got it pretty much figured out in just one week! I’ve spent five years recovering from my injuries and I don’t want to waste any more time!”

That’s why Cliff decided to enroll at ECPI University. Before his accident, he worked in the sprinkler business. However, the physical demands of that job meant he had to find another career. “I could have just stayed home and lived on disability but that’s just not me. I’ve always been a computer geek and when I learned that I could earn my degree in just 2.5 years, I was ready to go.”

Cliff is now studying Database Programming at the Virginia Beach campus, and he is every bit as committed to his studies as he is his recovery. So far, he’s making straight A’s and has perfect attendance. He is even using what he’s learning to write an App for his arm that will increase its efficiency.

When Cliff is not in class or studying, he’s helping other burn victims get on with their lives. He goes to local hospitals and rehabilitation facilities to visit patients, and also stops off at fire departments to talk with young people about fire safety.

“I figure with a little bit of luck, I’ve got 40 more years to live,” Cliff says. “I want to make it count. For me, this is like a second chance at life. I’m glad I’m starting it at ECPI University. Everyone here has been so great. It’s a whole new beginning.”

Greensboro Network Security Graduate’s Road to Success: A Letter from a Grateful Mother

Welcome to the Summer 2015 Edition of eConnect