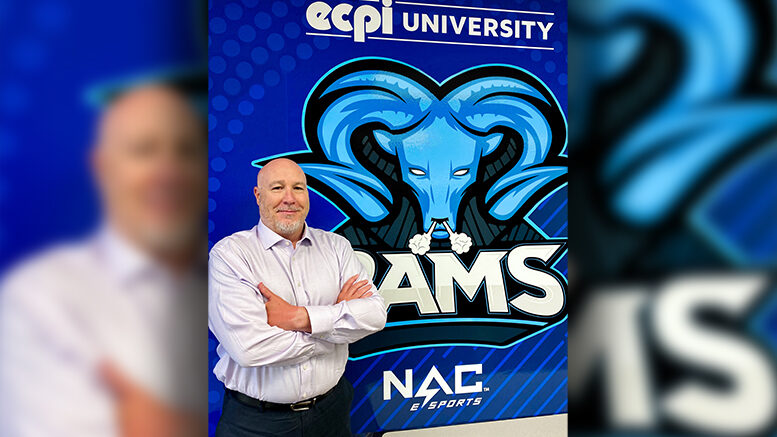 Spend any amount of time with ECPI University Assistant Director of Marketing and Esports Athletic Director Mike Glover, and you’ll soon learn about his passion for esports. It’s why ECPI University tasked him with creating our own RAMS team years ago, and why his peers elected him to the inaugural NACE (National Association of Collegiate Esports) Board of Directors in 2019.

This year ends his three-year commitment to the NACE Board, after serving as Chair Elect in 2021. Read more about his time with NACE and where he sees esports heading in his Q&A below!

What do you think was NACE’s greatest achievements while you served on the board?

“NACE’s greatest achievement while I was serving on the BOD was the partnership with Collegiate Star League (CSL). By having NACE and CSL come together to offer collegiate esports competitions, we effectively became the largest, and most well-organized collegiate esports organization in the world. I also served on the subcommittee that negotiated the partnership, and then presented the agreement to the remainder of the board who unanimously voted to approve the partnership agreement in the summer of 2021. This officially formed the NACE Starleague, a partnership that’s in the final stages of being reapproved for an additional five years.”

What is your favorite memory?

“My favorite memory of serving on the board of directors would definitely be meeting all of my fellow board members in person, sharing a meal with them, and bonding over our shared collegiate esports experiences.”

What challenges did you face?

Where do you see eSports going over the next 5-10 years?

“Esports is the next generation of competitive sports entertainment. Right now, it remains very much somewhat of a sub-culture. I expect to see professional and even collegiate esports become part of the standard household vernacular in the very near future. Families will have favorite professional teams and college graduates will cheer on their alma maters as those schools compete. I think we will watch it all on national television, as well as a variety of streaming services.”

What’s Next for the Rams? The ECPI University Rams had a tough Spring season, but Coach James is currently preparing the team for Fall 2022. Another round of OPEN TRYOUTS will occur this July. The team may have some work to do, but we have every confidence in our Rams!