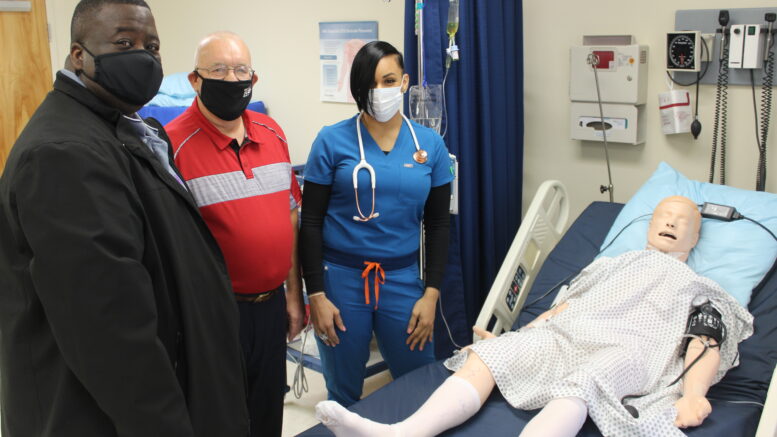 I remember driving down the road and seeing this huge banner saying “Earn Your Nursing Degree in as little as 18 Months.” Memories flashed back to the day I first entered college for nursing. I had gotten pregnant and later dropped out. But every day I saw this sign and I started to gain hope. What if I tried again? At the time, I was in Air Force reserves and was a federal employee at the Naval Information War Command, but I felt so incomplete. Work had started to become mundane and monotonous to me.

I kept wondering what it would be like if I went all-in on my dream and didn’t give up? One day, I decided to give ECPI University a call. They scheduled some time for me to come in. I was so nervous. I didn’t expect to take the entry exam that day. I agreed to do a few portions, and each time, I surprised myself and passed. The next morning, I was scheduled to take the final part which was the science portion. This was my biggest insecurity. I hadn’t taken a science class since high school. Here I am in my 30s, about to test on something, and I wasn’t sure if I even had the knowledge. I think I passed by one point.

I was scheduled to start school in January 2018. A week before classes began, I got the scariest phone call of my life. My mama was seizing. All sorts of thoughts went through my mind. Mama wasn’t even sick. She had no health issues. My heart raced as I thought the worst. After numerous tests, mama was diagnosed with stage four lung cancer that had already metastasized to her brain. I stayed with her every night in the hospital.

“I may have lost a lot, but what I gained in the process, who I became in the process, was much, much more. Thank you ECPI University for helping me throughout my tenure, especially Mr. William Talley and Mr. Ray Nelson. This definitely was the Best Decision I Ever Made.”

The next month, I got my acceptance letter. It was the best Valentine’s gift ever. I made a deal with myself that if I got accepted, I would resign from work and fully commit to my dream. If I didn’t get in, I would finally make peace with never becoming a nurse. Needless to say, I resigned and attended the nursing orientation. Over the next 18 months, what I thought was going to be a breeze and a dream come true became the biggest hurdle of my lifetime. My husband and I separated halfway through. I got stressed out and briefly quit school. I thought maybe this wasn’t for me.

My mama’s health was getting worse. I was experiencing caretaker burnout, but I wouldn’t take one minute back. I failed two classes due to not managing my stress better. In February 2019, mama started hospice care, and I started more clinicals. I was so afraid she would die, and I would fail again. I started therapy to try to mentally prepare myself, but nothing really does prepare you for the passing of your mother. She passed away in March 2019.

Right after that, my bank refused my application for more time to pay the mortgage. They decided to foreclose. I was six months away from graduating. I couldn’t give up now, but I had run out of money. I just kept praying and stayed faithful that something would work out. Then, I lost my cousin to rectal cancer with complications from HIV. Blow after blow, I kept telling myself that I could go on. I just didn’t want to give in. I was so close to my dream. Lord, please help me!

By August 2019, my divorce was finalized and I had filed for bankruptcy. It sounds bad but for me, things were starting to look up. I had a little more hope that my children and I would have a home and that my going to school was not in vain.

On November 3, 2019 I completed the nursing program with honors. I went to take my NCLEX on pinning day because I really needed to get a job so I could save my home. I passed and then walked across the stage that day as an RN. Five days later, I was hired for my first job and that, along with the bank letting me refinance, allowed me to save my home. I may have lost a lot, but what I gained in the process, who I became in the process, was much, much more. Thank you ECPI University for helping me throughout my tenure, especially Mr. William Talley and Mr. Ray Nelson. This definitely was the Best Decision I Ever Made.

Student Clubs Use Remote Technology to Stay Engaged During Pandemic