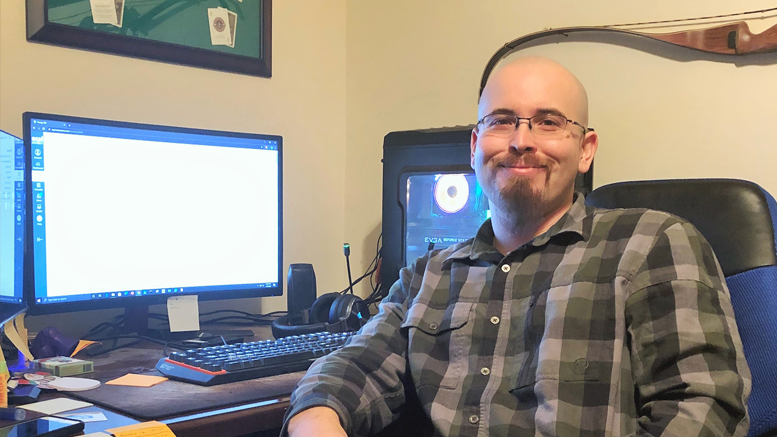 When Bennie Ramirez graduated from high school, he had a plan. Study criminal justice at a community college and then become a police officer. Yet despite having an associate’s degree, he could not find a job in law enforcement, so Bennie joined the Marines and became an MP. After five years on active duty, he tried once again to find work as a police officer but was not having much success.

After working briefly in private security, Bennie decided it was time to switch to Plan B. “I have always been interested in computers, and cybersecurity most of all,” says Bennie. “One day, I heard an ad on the radio for ECPI University and decided to check it out.”

Bennie liked what he saw and enrolled in the Cyber and Network Security program at the Richmond-Moorefield campus. “My teachers were amazing,” he says. “I went to school at night and many of them had really substantial jobs during the day. They would often come in with examples of things they were dealing with at work which helped us understand the real-world side of what we were learning. I would always stay after class and pick their brain.”

Soon, Bennie had made friends with a number of other students who, like he, were interested in starting a campus cyber defense team. Working closely with Cyber and Network Security faculty member David Conrad, they formed the team and began preparing for their first competition with the National Cyber League (NCL).

“Bennie was an instrumental part in the success of the NCL Orange 236 Team,” says Mr. Conrad. “He spent many hours, off the clock, designing labs that would help students better understand concepts that they would be tested on in the NCL Tournament. If that wasn’t enough, when the club was running, he would be constantly walking around helping other members.”

In that first competition, four members placed in the Gold Bracket, ranking them among the top 15 percent in the nation. Bennie says they learned a lot from that competition. From there, the team went on to the Global Cyberlympics where it placed 270 out of 4,844 teams worldwide. What’s more, a large portion of those teams were comprised not of college students, but working professionals.

“My teachers were amazing. I went to school at night and many of them had really substantial jobs during the day. They would often come in with examples of things they were dealing with at work which helped us understand the real-world side of what we were learning.”

Right around that time, Bennie decided it was time to recruit a new team member, his brother Dannie. “He had gotten out of the Marine Corps and was in a dead-end job,” says Bennie. “I figured it was time for a ‘big brother’ speech and told him that he was smart enough to do this sort of thing. He ended up enrolling at ECPI and it has made a huge difference. He has really turned his life around.”

As for Bennie, he’s wrapping up his final term and already has a job at the Defense Commissary Agency where he says he is making twice as much money as he did working private security. He says ECPI University has made all the difference. “The Moorefield campus under the guidance of its current faculty and staff is in good hands,” he says. “It’s one of the few places where a student with enough drive can change the way they experience their education.”

Now, Bennie says he is aiming to move up from a support technician role to an analyst position. What’s next after that? “Maybe I’ll go to work for a large corporation working as a white hat hacker,” says Bennie. “The opportunities are enormous. Everywhere I go, it seems like someone wants to hire me. It’s nice to feel wanted and it also feels good knowing that I am doing something that is really important.”